Why is it wrong to use profanity? After all, aren’t words just words?

by Alex McFarland and Shari Abbott 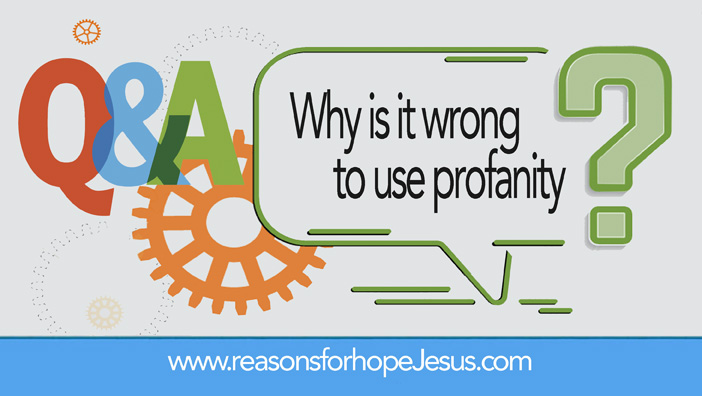 While words are “just words,” every word carries a meaning and an influence that is used to communicate and that’s why words matter.  Our ability to use words to communicate is a gift from God called language.  How we use language is a choice by man and as with most things, there is a good choice and a bad choice in how words are used.

Strictly speaking, profanity means to take God’s name in vain—to profane it. Dictionary.com defines it as an adjective meaning “characterized by irreverence or contempt for God or sacred principles or things; irreligious” and as a verb meaning “to misuse (anything that should be held in reverence or respect); defile; debase; employ basely or unworthily.”  The Bible gives examples of profanity, including:

God commanded holiness of the priests of Israel and commanded that they not profane (pollute, debase) themselves (Lev 21:4)

God spoke of Judah profaning (violating) God’s holiness when they aligned themselves with pagan nations  (Mal 2:11).

We are never to profane God in any way, not His name, His Person, His statutes, His teaching or anything else that is of Him or represents Him.  Why? Because He is holy and therefore is due all honor and respect.

A lot of words used today are called profanity but are actually just vulgar speech. Vulgar speech is defined by dictionary.com as, “characterized by ignorance of, or lack of, good breeding or taste:”   It’s really more a matter of propriety that we refrain from using vulgar speech.

Language is a gift from God and the words that make up a language should be respected and used appropriately.

Language (using words) is how we communicate and, in our communication, we are to reflect God.  That’s why the apostle Paul commands us to avoid foolish speech and coarse joking (Eph 5:4) because by avoiding such and by choosing our words wisely, we honor the One who gave us words, the One we represent—Jesus.

Read more:
Do Our Words Matter?
Let No Corrupt Words Proceed Out of Your Mouth
By Your Words

***For in-depth answers to some of the most challenging Bible questions, Visit