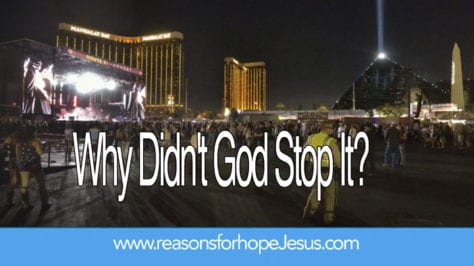 When “Why?” Isn’t Answered

When something terrible occurs — be it an accident, a death, a serious medical diagnosis, etc. — we are quick to ask, “why, God?”  As Christians, we already know the answer, but often we still ask.

So much of our pain and suffering is due to the fallen nature of man and the cursed world in which we live. God didn’t create us to have serious diseases and accidents or to experience horrible tragedies.  He created man to live forever in communion with Him.  But we know that Adam’s choice to disobey God changed everything.

When something as heinous as the shooting in Las Vegas takes place, we try to make sense of it.  It was a horrendous act of violence that was premeditated and willfully carried out.  In the aftermath, with the shooter dead, authorities look for clues as to why the shooter would have committed such a horrific crime.

We, as Christians, know the real reason. It is the sin of man that produces evil in the heart.

While we biblical reasoning to answer “why did this happen?” and “why did he do this?” we are left to wonder, “why didn’t God stop him?”  Innocent people, enjoying an early autumn, outdoor, music concert were gunned down.  Their lives were ended and families lost husbands, wives, sons, and daughters.  Others lost friends, neighbors, and co-workers. With 58 dead and 527 injured (as of this writing), and all in attendance having experienced great terror, we mourn for all who were personally touched and pray that they receive God’s comfort.

We’ve seen it before.  In this century alone, we have experienced many, many terrorist attacks with high death tolls.  Those with more than 10 deaths include

Sadly, there have been many others similar tragedies. Fortunately, they had fewer deaths and injuries.

So yes, we have seen it before and, yes, we will see it again.  And we know that the answer to the “why?” question is the evil and hate of fallen man that opposes God’s goodness and gracious love.

Such tragedies are a clear and present reminder of an ongoing battle.

Taking of life, in limited or epic proportions, is the most obvious manifestation of this battle between God and Satan.

Why Didn’t God Stop It?

This is the really difficult question and all Christians struggle with it.  We know that God is in control of all things.  He is omniscience, omnipresent, omnipotent — and omnibenevolent.  So why didn’t he stop the evil that was inflicted on those innocent people on that Sunday night in Las Vegas?

The Answer Is: We Don’t Know.

While that is a simple answer, and it is the true answer, it’s not a very satisfying answer.   We want to make sense of things in our world.  We want to know why something like the Las Vegas shooting happened. And, we want to know why God didn’t stop it.  But in our wondering and reasoning, we need to be cautious.  We don’t want to be like Job’s friends who came up with reasoned answers to explain Job’s suffering.  While their reasoning seemed good, we learn from God’s Word that it was wrong.

When Job’s friends, Eliphaz, Bildad, and Zophar came to comfort him, they offered their opinions. They said that Job’s suffering must have come because he had sinned.  They saw Job’s suffering as God’s judgment on him.  But Job did not agree.  In the midst of his darkest season, Job maintained his innocence. But he also wondered where God was and if God had left him.

It’s important to note that Job never got an explanation of why such calamity had come upon him.  Job asked, but God never told Job that his suffering was inflicted by evil forces.  Instead, God waited two years and then He spoke to Job of things he could not understand (Job 38-41, i.e. Job 38:22-24).  Jobe was given a greater understanding of the awesomeness of his God, a keener awareness of God’s love and presence in his life, and a heart filled with humility and repentance.

“I know that You can do everything, And that no purpose of Yours can be withheld from You. [Job acknowledged that God is sovereign over all things]

You asked, ‘Who is this who hides counsel without knowledge?’ Therefore I have uttered what I did not understand, Things too wonderful for me, which I did not know. [Job acknowledge his inability to understand how God was working.]

Listen, please, and let me speak; You said, ‘I will question you, and you shall answer Me.’ I have heard of You by the hearing of the ear, But now my eye sees You. [In God’s questioning  of Job, chapters 38-41, God revealed Himself more clearly to Job.]

Therefore I abhor myself, And repent in dust and ashes.”  [The calamities that befell Job, were met by God’s mercy and grace and Job repented.]

Be slow to try to trace God’s hand.  More often than not, we can’t clearly understand what God is doing in many of life’s circumstances.

Be quick to trust God’s heart. Remember that in all things, God works for His glory and our good and that He works in His time, not ours.

The answer to all the “why” questions, is “Who!” — the Lord Jesus Christ.  He sits on the throne, He rules over all thing, and He reigns in the hearts of all who are His.  The Kingdom of God on earth is engaged in a spiritual battle with the Kingdom of Darkness — but we know who wins!

Mat 28:18-20  And Jesus came and spoke to them, saying, “All authority has been given to Me in heaven and on earth. Go therefore and make disciples of all the nations, baptizing them in the name of the Father and of the Son and of the Holy Spirit, teaching them to observe all things that I have commanded you; and lo, I am with you always, even to the end of the age.” Amen.

Only by turning the hearts of people to our God will we be able to stop evil in our world.  The evil that lurks in the heart of man can only be vanquished by the grace of Jesus Christ.

Remember Jesus’ words when He spoke of the tragedy of the tower in Siloam falling and killing 18 people.

Luke 13:4-5 “…those eighteen on whom the tower in Siloam fell and killed them, do you think that they were worse sinners than all other men who dwelt in Jerusalem?  I tell you, no; but unless you repent you will all likewise perish.”

God allows tragedies to happen. That we know. But He does so with a purpose that is good.  In every tragedy is the hope that it will cause people to seek God, to repent of their sins, to put their trust in Jesus, and to be saved by His grace.

Go serve your King by sharing the gospel with all people.