Who was Dr. Nathanson? Why is He Important? 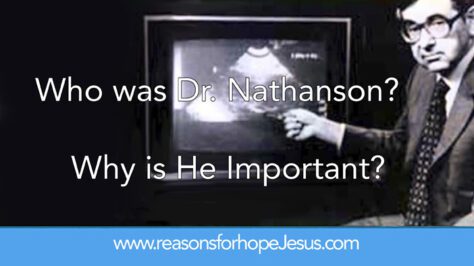 If you don’t immediately recognize this man’s name, you need to know and understand who Dr. Nathanson was, what he did, and how the Lord Jesus Christ changed him completely.

[Listen, below, to an interview with great details about this man. It’s shocking and worth your time.]

Bernard N. Nathanson (July 31, 1926 – February 21, 2011) was an American obstetrician/gynecologist, the co-founder the National Association for the Repeal of Abortion Laws (NARAL, 1969, later renamed National Abortion Rights Action League), and a director of New York City’s Center for Reproductive and Sexual Health (CRASH).  He worked with Betty Friedan and others to legalize abortion in the United States and was influential in promoting abortion on demand, which was affirmed in the Roe v. Wade decision.

From Pro-Abortion to Pro-Life

Dr. Nathanson became known as the father of the abortion industry, but with the development of ultrasound in the 1970s, he was able to observe a real-time abortion — and that caused him to reconsider his views on abortion.

Dr. Nathanson’s second documentary, Eclipse of Reason, addressed late-term abortions. In the documentary, he stated that the numbers he once cited for NARAL concerning the number of deaths linked to illegal abortions were “false figures.”

Dr. Nathanson’s mind was changed when his eyes were opened to see an ultrasound of an aborted baby.  With his change from abortion activist to pro-life advocate, his atheist ears were also opened.  He heard the truths of God, he met Jesus, he repented of his sins, and Jesus saved him.

In 1996, Dr. Nathanson wrote his autobiography, telling of his previous work as an abortion provider and abortion rights activist, including the abortion of his own child in the 1960s when his girlfriend became pregnant. He wrote frankly about his role: “I am one of those who helped usher in this barbaric age.”  Nathanson also explained about what he called the “vector theory of life” that states from the moment of conception there exists “a self-directed force of life that, if not interrupted, will lead to the birth of a human baby.”

Dr. Nathanson titled the book, Hand of God, and wrote about finding his way to Jesus:

“The New Testament God was a loving, forgiving, incomparably cosseting figure in whom I would seek, and ultimately find, the forgiveness I have pursued so hopelessly, for so long.”

Dr. Nathanson spent the rest of his life speaking against his own pro-abortion teachings, and is often quoted as saying that abortion is “the most atrocious holocaust in the history of the United States.”  Bernard Nathanson died of cancer in New York on February 21, 2011, at the age of 84.

Listen to an interview with the woman who visited Dr. Nathanson shortly before his death.  With his permission, and because of his desire to make Americans aware of the lies and deception of the abortion industry, she tells his story in great detail.  A 26-minute interview, but worth every minute.  You will be shocked.  Get informed now.

One of my favorite verses for validating that life begins at conception is:

Prov 23:22  Listen to your father who begot you, And do not despise your mother when she is old.

“Begot” (or begat) is the Hebrew word “yalad.”  It means “to bear young” and when it is used in the context of parent and child in the Bible it is speaking of a biological father begetting a child, i.e. giving life to a child.

So this raises the question, when does a biological father “give life” to the child.  It’s not at delivery because it’s the mother who brings the child into this world.  The biological father gives life to a child at conception when the father’s sperm meets the mother’s egg and life is born (conceived) in the womb.  Technically, we are all nine months old when we are born into this world.

More Bible Verses that Speak of the Sanctity of Life

Gen 1:26-27  Then God said, “Let Us make man in Our image, according to Our likeness…”  So God created man in His own image; in the image of God He created him; male and female He created them.

Lev 18:21  …you shall not let any of your descendants pass through the fire to Molech…

Job 12:10  In whose hand is the life of every living thing, And the breath of all mankind?  [Answer: God’s hands]

Job 31:15  Did not He who made me in the womb make them? Did not the same One fashion us in the womb?

Isa 44:2  Thus says the LORD who made you And formed you from the womb, who will help you…

Jer 1:5  Before I formed you in the womb I knew you; Before you were born I sanctified you…

Luke 1:41  And it happened, when Elizabeth heard the greeting of Mary, that the babe leaped in her womb…

Luke 1:44  …as soon as the voice of your greeting sounded in my ears, the babe leaped in my womb for joy.