Where Did Cain Get His Wife? Who Was Cain’s Wife? 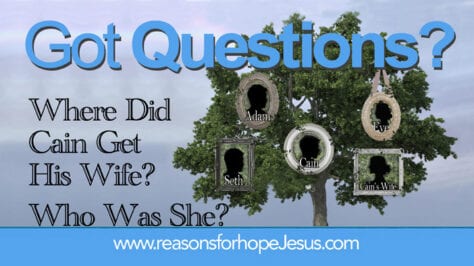 The question “Where did Cain get his wife?” is asked by both skeptics and believers. The Bible answers the question.

Cain was the firstborn son of Adam and Eve. He was born after Adam and Eve were cast out of God’s perfect Garden because of their sin (Gen 3:24).  Gen 4:1-2 tells about the birth of Adam and Eve’s second son, Abel.

Genesis 4 tells of both Cain and Abel bringing sacrifices to God.  When Abel’s was accepted and Cain’s was not, Cain rose up against his brother and killed him (Gen 4:8). God gave him an opportunity to repent, but when he did not, God put a curse on Cain and drove him out from the land of his family (Gen 4:9-15). We then read that Cain went east of Eden to a place called Nod and there began his own family:

Gen 4:16-17  And Cain went out from the presence of the LORD, and dwelt in the land of Nod, on the east of Eden.  And Cain knew his wife; and she conceived, and bare Enoch: and he builded a city, and called the name of the city, after the name of his son, Enoch.

Since there were no other people groups on earth, it’s logical to ask, where did Cain get his wife?

The Bible does not say that Cain found a wife in the land of Nod. Scripture only says that Cain “knew his wife and she conceived” and gave birth to a son (“knew,” in ancient Hebrew literature, means he had sexual relations with her). The Bible also records that Adam and Eve had more children.

Gen 5:3-4  And Adam lived an hundred and thirty years, and begat a son in his own likeness, after his image; and called his name Seth: And the days of Adam after he had begotten Seth were eight hundred years: and he begat sons and daughters:

Cain, Abel, and Seth are the only children of Adam and Eve mentioned in the Bible. But it is clear that there were others, both male and female.

That’s the answer.  Because there were no other people groups on earth, Cain had to have married one of Adam’s daughters. And yes, she would have been one of his sisters.

This sounds terrible and unacceptable to modern minds, but in ancient human history, intermarriage was acceptable, permissible, and necessary.  It wasn’t until many generations later that God prohibited marriage between close relatives:

Leviticus 18:6 None of you shall approach anyone who is near of kin to him, to uncover his nakedness.

Leviticus 20:11 The man who lies with his father’s wife has uncovered his father’s nakedness; both of them shall surely be put to death. Their blood shall be upon them.

Deuteronomy 27:20 Cursed is the one who lies with his father’s wife, because he has uncovered his father’s bed.

This raises the question, Why would God forbid intermarriage when He originally permitted it?

The reason that after generations passed God began to forbid close intermarriage is because of the introduction of genetic defects into the human race. In the Garden after Adam sinned, Adam’s physical body began to die and genetic mutation began to appear in that which God had created perfect — the human body.   With each passing generation, these genetic mutations increased and God’s prohibition of intermarriage, many generations later, was given to protect His people.  However, when Cain married one of his sisters, their brother-sister genetic makeup was still pure enough that intermarriage would not have been a problem.

The reason God forbid close intermarriage was because of the introduction of genetic defects into the human race.

In the Garden, prior to the fall, Adam and Eve had genetically perfect bodies. But when they sinned, their bodies began to die and with each passing generation, genetic mutation increased.  That’s why, many generations after Adam and Eve, God protected His people by the Levitical law of forbidding marriage between close relatives. However, when Cain married one of his sisters, their genetic makeup would have still been pure enough that intermarriage would not have been a problem.

So Who Was Cain’s Wife?

We don’t know her name.  The Bible does not tell us who she was or when he took her to be his wife.  There are extra-biblical stories that attribute a name to her, but they should not be considered reliable.

What we do know is: