What is Happening to Our Country? What Can We Do About It?

by Alex McFarland and Shari Abbott 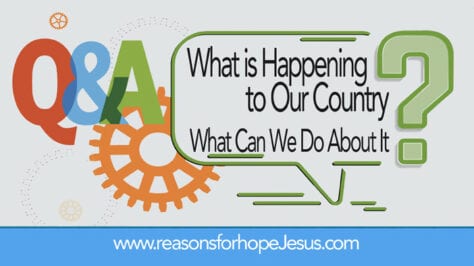 As our nation struggles to process the recent shootings in El Paso, TX and Dayton, OH (31 victims), countless media voices are lending condolences and commentary.  The President condemned the shootings as “acts of pure evil,” which they were. Pastors Greg Laurie and Jack Graham attributed the surge in shootings to an escalating spiritual battle and the work of the devil.  And of course, the media is abuzz with well-worn talking points on gun violence and social woes like welfare reform, increased taxation, systemic racism, etc.  More than ever, we hear cries that a more fair America will result in a more safe America.  But consider that the America of 2019 is not as poor nor as racist as the depression-era 1920’s America; yet comparatively speaking, Americans of any ethnicity were exponentially less likely to suffer any type of public violence in any decade prior to 1980s.

So why has there been a 700%+  escalation in public shootings over the last 30-40 years? What has changed?

In the late 1970s, militant secularist agendas had really gained momentum and since that time those agendas are increasingly felt in our country.  In countless university classrooms, professors with activist hearts (many of whom came from the 1960’s anti-establishment ‘wakefulness’ movement) are influencing more young minds than ever before with secularism.

Anti-God and anti-American sentiment was introduced in 1970’s and 1980’s education (I know; I am a product of K thru 12 and undergraduate public education). Balanced examination of many key issues (God’s existence, the nature of ethics, the Christian foundations of Western civilization, how the church birthed the civil rights movement, etc) never takes place in most universities today.  Today, the few brave students who speak up for God and country are usually mocked by professors.

We are endlessly told that any mention of God or morality violates the First Amendment.  This is false.  In fact, the person who wrote the First Amendment (Fisher Ames) was a man of faith who wanted the Bible taught in all public schools.  He felt that knowledge of the Bible would instill in the minds of young people a sense of moral responsibility.  Can you imagine the firestorm of litigation such an idea as that would ignite today?  How is it that 21st-century secularists seem to know more about the application of the First Amendment than the man who wrote it?

The Faith of Our Founding Fathers

The framers of the Constitution certainly didn’t think the public mention of God, the Bible, or morals was unconstitutional.  To the contrary, Hamilton, Madison, Washington, Jefferson, and the whole lot insisted that knowledge of God and biblical morals and ethics was necessary in order to maintain a civil society. Yet organizations like the ACLU, People United for Separation of Church and State, the National Association of Educators, American Atheists, the Democrat party, militant secularists, and others have spent decades working to squelch any mention of God, the 10 Commandments, and morality in public.  Collectively, they amount to a self-appointed “thought police,” and they have robbed generations of citizens of the knowledge of our rich Judeo-Christian foundations.

Sadly, respect for human life continues to diminish in our culture. Belief in God is waning and biblical truths, morals, and ethics are disappearing from our laws, classrooms, entertainment, media, and culture.

For evil to decrease, good must increase.  And, “what is good?”  It’s not “what.”  It’s who!  Jesus said, “why do you call me good?  Only God is good.” (Mat 19:17, Mark 10:18, Luke 18:19)   Jesus is God, and truly, only God is good.  The solution to the problem of evil in this country is to turn the hearts of the people to the Lord Jesus Christ.  Then His Holy Spirit will work in and through them to multiply the good that only He can increase, and thereby decrease evil.

Our deepest condolences to the bereaved in Texas and Ohio. We pray God’s comfort for all who lost loved ones to such senseless violence. But to those who maliciously work to keep America “free” from Christian morality, ethics, and biblical truths, let it be known that the bloodshed will continue to happen as evil in our country continues to grow.

READ ALSO: What is Happening in Christianity?

***For in-depth answers to some of the most challenging Bible questions, Visit