Who is Sweet Jacob? 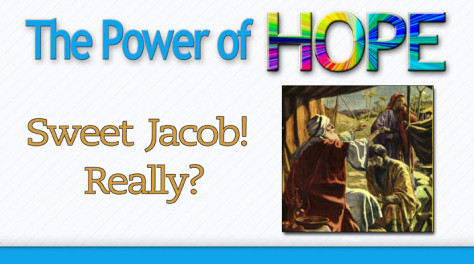 Sweet Jacob!  It sounds like a spring flower, like “Sweet William” — but it’s not.  Perhaps you have a kind and honest friend whose name is Jacob and this name fits him well, but “sweet” is not an adjective most would associate with Jacob the son of Isaac.

A while back I was listening to a Christian radio program when I heard an ad that made me wonder with concern.  A Rabbi was speaking of the lessons we can learn from Isaac, Rebecca, Esau, and Jacob.  The vast difference in how he sees Jacob and how Christians see Jacob is startling.  I’ll present the information so you can decide for yourself.

As Christians, we know that Jews do not accept the further revelation of God in the New Testament.  The Jewish Bible does not contain historical records of Jesus’ life, ministry, death, burial, and resurrection, or any other New Testament writings, including the letters of instruction or the prophetic passages.  But both Jews and Christians read the same Old Testament Scriptures — the same Pentateuch (Genesis-Deuteronomy), the same historical books, poetic and Wisdom writings, and major and minor prophets. They might be in a different order in the Christian and Jewish Bibles, but they all originate from the same ancient manuscripts. Therefore, reading and interpreting the historical accounts and people in the Bible should produce similar understandings. However, that’s not always the case.  And that wasn’t the case in the teaching I heard on the radio.

The different interpretation I heard, caused me to wonder, how can Christians and Jews read the same Scripture yet our interpretations can vary so greatly?  Let’s consider how we perceive Jacob and how this Jewish rabbi presented him.

A Christian Interpretation of Genesis 27

As recorded in the Old Testament, Jacob (God later changed his name to Israel) was the son of Isaac and Rebecca. He was also the father of 12 sons who would each become the father of a tribe of people — thereby making up the twelve tribes of Israel.   Most Christians know the historical account of how Jacob tricked his father, Isaac, into giving him the blessing that should have gone to the firstborn, his brother Esau (Gen 25:27-34) 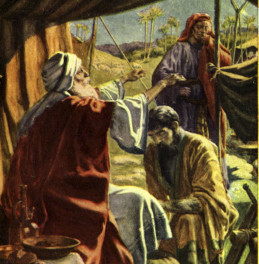 Isaac into blessing Jacob rather than Esau.  Isaac was distraught when he realized he had not blessed Esau. He was not able to rescind the blessing and give it to Esau, his firstborn son, as he had intended and as was custom.

The name “Jacob” means “holder of the heel,” and it’s no surprise because the Bible tells us he was born holding his twin brother Esau’s heel (Genesis 25:16).  But the name “Jacob” also carries the meaning of “supplanter.”   Supplanter is defined as one who takes the place of someone who was there first.  Jacob certainly did that.  Supplanter is also often used to refer to governments and rulers of countries.  The word evolved from the Latin word “supplantare,” meaning “to trip up or to overthrow.”  That is exactly what Jacob did when he conspired to trick his father into bestowing the blessing of the firstborn upon himself. He overthrew his brother and took his place.

While it was God’s plan for the older to serve the younger (Gen 25:23), God does not desire His will to be accomplished through deception and trickery.  And that’s exactly what happened.  Genesis 27 tells of Rebekah’s and Jacob’s deception of Isaac, for selfish and self-serving personal gain. Isaac was near death and ready to bless Esau with the birthright and inheritance of the firstborn.  But Rebekah and Jacob schemed to get the blessing for Jacob.  Couple that with the event recorded in Genesis 25, when Jacob took advantage of Esau’s physical 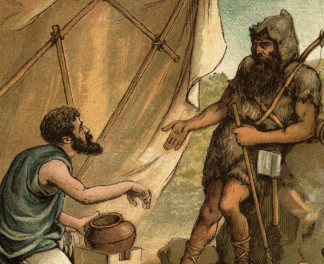 hunger to entice him into trading his birthright for bread and stew, and the only conclusion is that Jacob’s ethics and values were anything but God-honoring.

Now, I’ll share the transcription of the account of Isaac, Rebecca, Esau, and Jacob as told by a Jewish Rabbi on the radio.

A Rabbi’s Interpretation of Genesis 27
Isaac, Rebecca, Esau, and Jacob

Isaac had two sons, Jacob and Esau. They were very different.  Jacob was a sweet boy, not conniving, not cynical.  Esau was aggressive.  He was a hunter and a man of the fields.

Isaac thought about when He dies who will represent the family.  He thought Esau to be the best for the task, because Esau would be able to protect himself from all the forces and be able to sustain these values.

Rebecca, with her special insight, thought the only one who could really preserve this tradition and heritage is the wholesome and sweet Jacob.  She realized that ethics and values cannot survive in this cold, harsh world without power.

Somehow in order for Jacob to get the blessing from Isaac, she had to convince him to combine both of those traits—power with morality.

What Isaac was really saying is the voice is the voice of Jacob, the voice that sings praises to the Lord.  In other words, the value, the morality is there; but the hands are the hands of Esau.  You have learned how to take this morality and ethics and with your hands like Esau be a fighter in order to survive.

Isaac realized that Rebecca was right.

Power without morality is worthless. Morality without power is suicidal. And Jacob proved to his father that he can bring both of these forces together.  The morality of being a simple person, a naive good guy, with the fierce and brutal prowess of Esau to survive in the world, to go out and hunt and dominate.

These are two completely different interpretations of the same Scripture passage.  I’ll stick with the Christian interpretation!!!  There is much personal interpretation, not biblically supported, in what the Rabbi spoke. So why would he think and say such things?   I suggest it’s because Jacob is a revered father of the nation of Israel (Abraham, Isaac, and Jacob) and the patriarch of the 12 tribes of Israel.  And I agree, he should be revered– not for his sinful ways, but when he entered into the covenantal promises and God changed his name to Israel (Gen 32:28).

The great lesson to be learned from Jacob’s actions is not about what he did.  This lesson for us is about the faithfulness of God, the forgiveness of God, and how God’s great love for sinners can change a trickster like Jacob.  He changed Jacob, which means supplanter, trickster, into Israel, which means God contended and God prevailed. (Gen 32:22-32) That’s what happened to Jacob and that’s what happened to us.  He took us, while we were yet sinners, and transforms us into new creations in Christ.