The Super Bowl of Drunkenness? 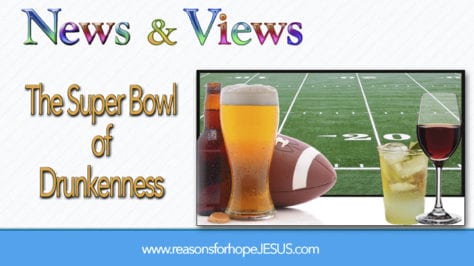 Super Bowl Sunday also holds a second-place score in another “event.”  The day of Super Bowl is second only to Thanksgiving Day for food consumption.  Over the last couple decades, Super Bowl parties have become a type of “national holiday” and the celebration with food and drink takes backstage only to the game itself.  It’s interesting how, as the screens on which we view the games are getting larger and larger, so also are the celebrations get bigger and bigger.

Another Statistic of Great Significance

Super Bowl Sunday is second only to New Year’s Day for drunk driving fatalities. I remember well when a friend of ours was hospitalized in December 2011 awaiting a heart transplant.  The doctors expressed anticipation that a donor heart might become available on New Year’s Day or Super Bowl Sunday.  That’s a sad but true commentary on the statistically-proven, high number of deaths on those two days.

Alcohol Through the Ages

The Bible has a great deal to say about alcohol.  It is one of the greatest temptations to sin and it has been around since before the Great Flood:

Mat 24:38  For as in the days that were before the flood they were eating and drinking, marrying and giving in marriage, until the day that Noah entered into the ark,

These are Jesus’ words, but we note that He only mentioned “drinking” and not drunkenness.  However, in looking at the Genesis record about the time of which Jesus spoke, it is evident that this is about drunkenness:

Gen 6:5  And God saw that the wickedness of man was great in the earth, and that every imagination of the thoughts of his heart was only evil continually.

Is Drinking Alcohol a Sin?

The Bible does not declare the consumption of alcohol to be a sin (read, Is It a Sin to Drink Alcohol?), but it does tell that it is unwise to drink because it can lead to excess and drunkenness is a sin.  As Christians we know that drinking can harm our testimony by impairing our thoughts, words, and deeds, and, even worse, drunkenness can cause loss of control of our minds, mouths and actions.

So how does one stay safe and enjoy the game and festivities of Super Bowl Sunday?  The safest way is to make the wise choice and not drink anything. However, that will not always be the choice of everyone.

It is a personal decision (and it should be a very thoughtful and prayerful decision) whether to drink alcohol or whether to abstain.  Consider the risk of increased alcohol-related deaths,  well as alcohol-related sins. Consider also the wisdom of not indulging in alcohol.

Reasons Not to Drink

Stop and Think Before You Drink

There are many more reasons not to drink on Super Bowl Sunday, but statistics remind us of a very important reason…

On every day of the year, and especially on Super Bowl Sunday, Alcohol kills.

Try saying that to yourself before you take a drink on Super Bowl Sunday. Then consider how well you will be able to say it after one, two, or more drinks.  It might just cause you to STOP and THINK before you drink, then STOP and make a wise and God-honoring choice.

Prepare yourself to celebrate responsibly, read: Is it a Sin to Drink Alcohol?