Should Churches Be Used for Islamic Activities? 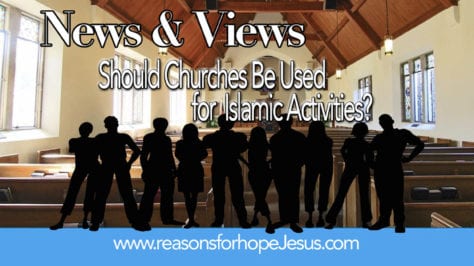 The recent controversy regarding two Methodist churches allowing Muslim groups to use their buildings brings to mind several pivotal issues of these pluralistic times.  The issues relate to the church’s unchanging mission within a very-much changed American culture.   If Christianity and Islam are merely two optional means to reach the same ultimate end, then Christian churches being used by Muslims should be okay. But is it?

For Christian believers, the core issues are these:

It is commonly assumed that the sum total of the church’s role is to worship God, love others, be an example to the community, and do what we can for those less fortunate.  Are these things part of the Christian’s responsibility?  Of course.  But Christians have an obligation before God to do even more.

The Church’s Obligation To The Great Commission

Throughout the dozen or so interviews I have done on this subject, I have marveled at how easily missed are two key points  Appearing on Fox News and Friends, I attempted to clarify for listeners (and for the Tennessee pastor who opened his church for use by an Islamic group) what obligations are entailed by Christ’s Great Commission.  I explained that the church’s mission is two-fold:

This two-fold commission can only be achieved when we proclaim the truth and refute error.

Inviting Muslims to Hear the Gospel

After one Fox network interview, I received more than 500 emails in 24 hours, many from Christians asking, “Alex, don’t you think that Muslims should be allowed to attend a Christian worship service if they want to?”  Absolutely!  But that was never the question.  There is a big difference between inviting an unsaved person to come under the sound of the Gospel and enabling a lost person to remain in their state of unbelief.  The former would be an example of obedience to the Gospel; I would say that the latter⎯ such as allowing a Christian church to be used for Islamic worship⎯ represents a betrayal of the Gospel.

That Which is Holy is to be Separate

In an on-air debate with the leader of the Tennessee church that invited a Muslim group to use its building, I was struck by the pastor’s appeals to “Christian love” and “the example of Jesus” as justification for his decision.  Do we really believe that Jesus would have offered Romans space in the Jewish Temple to practice Mithraism (a mystery cult in the Roman world during Jesus’ time)?  No. The Temple was God’s house.  It was the Holy Place set apart from the world for God.

The Tennessee pastor appealed to the parable of the Good Samaritan (Luke 10:33-37) as support for his church’s promotion of Islam. I responded in this way:  I agree that Christian love mandates (the Good Samaritan story illustrates this) that we are to help the neighbor who needs food, clothing, shelter, and medical care⎯ even if they are perceived to be enemies.  The lesson is this: We were enemies of God, yet he lovingly provided for our needs.  This is grace, and we are to go and do likewise.  But the parable of the Good Samaritan cannot be used to justify revision of the Great Commission to suit our 21st-century tolerant tastes.  The analogy breaks down in that the Tennessee Muslims would not have physically died had a building not been provided for their Islamic worship. And again, every church is God’s house. Church buildings are to be holy and set apart for God.