What Should Christians Know and Think About Roe v. Wade 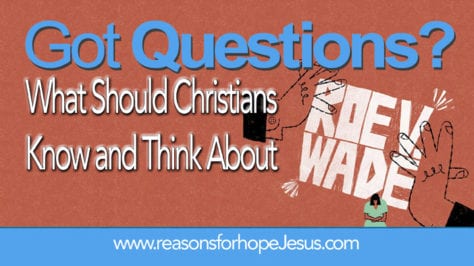 January 22nd is the anniversary of Roe vs. Wade, the case in which the US Supreme Court ruled on the issue of the constitutionality of laws that criminalized or restricted access to abortions. In doing so, on January 22, 1973, they made abortion legal in the United States.

On January 13, 1984, President Reagan issued a proclamation designating the Sunday closest to January 22 to be National Sanctity of Human Life Day.  Let’s look at the facts about both these days and then consider what Christians should know, and what they should think, about Roe v. Wade and the sanctity of life.

What to Know About Roe v. Wade?¹

Plaintiff: Norma McCorvey, using “Jane Roe” as an alias, and representing all pregnant women in a class-action suit
Defendant: Dallas County, Texas, district attorney Henry B. Wade
Plaintiff’s Claim: That the Texas abortion law violated the constitutional rights of McCorvey and other women
Place: Washington, D.C.
Date of Decision: January 22, 1973
Decision: Invalidated all state laws restricting women’s access to abortions during the first trimester (three months) of pregnancy and upheld only those second-trimester (three to six month) restrictions that protected the health of pregnant women
Significance: This landmark decision made abortion legal in the United States. 1.

National Sanctity of Human Life Day is a day proclaimed by several United States Presidents to recognize the sanctity of life.  This day is to be observed on the Sunday on, or closest to, the anniversary of the Supreme Court’s decision in Roe v. Wade (January 22, 1973).  Although the day has annually been recognized by Right to Life groups, some Presidents First have proclaimed the day and others have not:

The National Right to Life organization has declared National Sanctity of Human Life Day as “a wonderful statement of what the pro-life movement is really all about.”  Sadly, NARAL, Planned Parenthood, and other groups have said it signals a desire to roll back the rights of women.

What to Think About Roe v Wade?

As Christians, we know that Roe vs. Wade is a law that never should have been passed. All Christians should oppose Roe v. Wade and desire and work to overturn it.  We understand that man was created in the image of God and that every person born carries some of that image (Not God’s full image because of sin. Unlike Adam and Eve who were created sinless, every person born is born with sin. Read: What Does It Mean to Be Created in God’s Image?).  Because human life bears the image of God, we understand that every human life is of value and must be protected. Therefore Christians must take a stand to protect babies in the womb.

Pause and pray.  Don’t let National Sanctity of Life Day pass without praying for protection for all pre-born babies and speaking out to change the minds of those who support abortion.

What’s Ahead? HOPE!!! And Decreasing Numbers

There is great hope that we might one day stop the legalized killing of babies in the womb. CNN reported the following in November 2018:

According to a November 2018 report from the US Centers for Disease Control and Prevention, abortion rates in the United States have dropped to their lowest level in 10 years.  The latest CDC survey, covering 2006-2015, showed a 24% decrease in abortions from 842,855 to 638,169.

“The new CDC report shows a continuation of long-term declines in abortions,” said Rachel Jones, principal research scientist at the Guttmacher Institute. “Analyses have suggested that improved contraceptive use played a role… In some states, decreased access to abortion services contributed as well.”³
Note that “improved contraceptive use” and decreased access to abortion services” played a role.  That is wonderful.  However, our job, as Christians, is to create an awareness that a baby in the womb is a human life, given by God, precious and worthy of all protection.  May our words changed the minds of those who are pro-abortion and may our words also be a contributing factor to the decreasing number of abortions.

2019–Another Year of Hope to Continue Bringing the Numbers Down

Personally: Look for opportunities to speak against abortion and to present reasons for a pre-born baby’s right to life.

Socially: The National Right to Life organization and its local chapters, as well as many other pro-life organizations, work tirelessly with speakers and writers communicating the message and using activities and rallies to create awareness.  Join and support such organizations.

Politically: President Donald Trump has promised, “I will appoint judges that will be pro-life.”  With the court changing, there is great hope that the law will also be changed. May our legislators embrace the sanctity of human life and vote to protect the lives of babies in the womb.

Remember the words of our third president, Thomas Jefferson:

“The care of human life and happiness, and not their destruction,
is the first and only object of good government.”

As thousands of pro-life supporters gather in Washington, DC each year, many carry signs with words worth remembering. Consider these: