Remembering those who went to be with the Lord in 2013 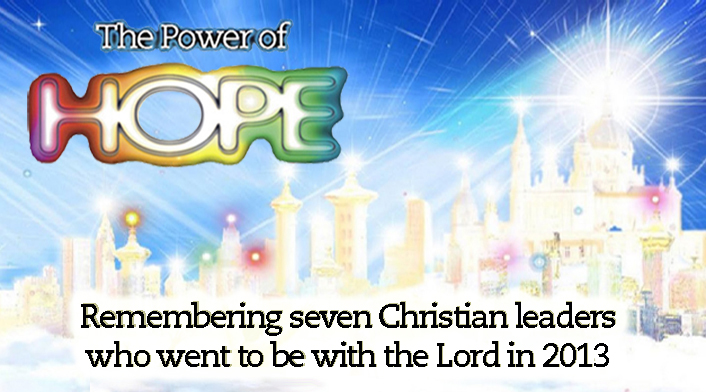 Every year Hollywood releases a list of prominent celebrities who have departed this earth.  Many newspapers and magazines also publish lists of notable deaths.

Reasons for Hope* Jesus would like to take a minute to remember seven Christians who served the Lord, and in 2013 went to be with Him.  These are only a few, who touched the hearts of many because of their far-reaching ministries.  Let us never forget the many unsung heroes of the faith who quietly proclaimed the gospel and served the Lord in less public ways.

served with her husband Francis as Presbyterian missionaries in Switzerland.  Together, they established L’Abri Fellowship, a retreat center in Switzerland founded to support the teachings of historic Protestant faith and teach a presuppositional approach to Christian apologetics.  She was a prolific writer and encouraged and challenged believers to faithfully engage in culture.  She died in March 2013 at the age of 98.

can easily be thought of as one who made a joyful noise  unto the Lord.   Worldwide, He sang praises and led more people in worship than anyone else has ever done.  He began a lifelong working relationship and friendship with Billy Graham when he partnered with him and began singing at his crusades in 1947.  Bev Shea is well remembered for his bass-baritone voice that loudly proclaimed in song, “I’d Rather Have Jesus,” “How Great Thou Art,” and “Just as I am.”  He was blessed with a very long life of service to the Lord and died in April 2013 at the age of 104.

will be remembered for his work as a Christian apologist, speaker, radio commentator and author. In 1973 he began in full-time ministry and continued tirelessly until his death. He founded The Berean Call, in 1992 for the purpose of encouraging spiritual discernment among those who regard themselves as biblical Christians. His books and teachings promote the authority and authenticity of the Word of God and will continue to help Christians build a strong foundation on God’s Word.  He died in April 2013 at the age of 87.

was a philosophy professor at the University of Southern California and a noted authority on spiritual formation and growth.  His books and teachings promoted passionate service to the Lord and he promoted a belief that a person cannot be a Christian without being a disciple.  His words, “The spiritual life is a life of interaction with a personal God, and it is pure delusion to suppose that it can be carried on sloppily,” support a theology of good fruit being an evidence of salvation.  He died in May 2013 at the age of 77.

was a Chinese pastor who spent 20 years in prison for his  refusal to bow to his communist oppressors. His bravery and strong faith in proclaiming, “The laws of God are more important that the laws of men,” should be an inspiration to all of us.  Lamb was a leader in the Chinese house church movement and he planted an illegal church in the city of Guangzhou, which today has grown to more than 4,000 members.  He died in August 2013 at the age 88.

is remembered not only for his faithfulness in preaching and teaching, but also for his warm and comforting voice and his joy spirit and jolly laugh.  The founder of the Calvary Chapel movement in California, Smith began with a congregation of 25 in 1965 and grew it to a network of churches that now exceeds 1,000 worldwide.  Smith will long be remembered as an influential pastor who trained many of today’s most prominent ministers. He died in October 2013 at the age of 86.

is best remembered for the creation of the Trinity Broadcasting Network (TBN), which he started in 1973 with one station.  At the time of his death, TBN had grown to more than 18,000 network affiliates.  Although somewhat controversial for his fund-raising, spending habits and the wide diversity in programming, there is no doubt that Crouch and TBN have greatly impacted the Kingdom of God here on earth.  He died in November 2013 at the age of 79.

I know I said “seven” and that’s a nice number to end with, but I would be remiss if I did not add the following.

There certainly are many other well-known Christians who went to glory in 2013, including Brennan Manning, C. Everett Koop, Pat Summerall, and many more.  But I want to take a minute to remember all the Christians whose lives had an impact on growing and nurturing God’s Kingdom, but whose names are little known, or not known at all, outside of their immediate family and friends.  They may have served in less public ways, but their service was still of great importance. We may not know their names, but God does.

My husband and I are missing such a dear friend, Brian.  He served in great ways at a local church, making a difference in the lives of many in a quiet and humble way.  He went to be with the Lord in June of 2013 and we miss him.  I’m sure you are missing someone also.  Take a minute and remember your friend or family member who went to be with Jesus in 2013.  Give thanks for their life and rejoice that they are at rest and peace with the Lord.