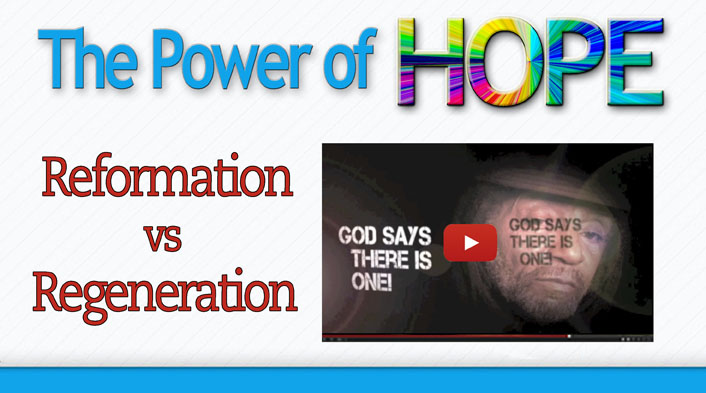 “Reformation vs Regeneration” is from the Fun with “Shuns” study course about biblical teachings that end in -tion (“shuns”).

Today we share the third of the lessons with you.  Christians need to be familiar with core biblical teachings.  Fun with “Shuns” will teach you biblical truths, or it will reinforce the doctrines that you already know.  You must know what you believe so you can live and share what you believe.

The Fun with “Shuns” study course is available in a study guide/DVD format for church or small group gatherings.  Visit the Reasons for Hope* Jesus store.

1: the act of reforming : the state of being reformed

a : to put or change into an improved form or condition

b : to amend or improve by change of form or removal of faults or abuses

In the book of Jeremiah, the Bible speaks of God telling His people to reform (amend) their ways:

Jeremiah 7:3  Thus says the LORD of hosts, the God of Israel: “Amend your ways and your doings, and I will cause you to dwell in this place.

Jeremiah 18:11  “…Return now every one from his evil way, and make your ways and your doings good.”

Jeremiah 26:13  “Now therefore, amend your ways and your doings, and obey the voice of the LORD your God; then the LORD will relent concerning the doom that He has pronounced against you.

Jeremiah 35:15  “…Turn now everyone from his evil way, amend your doings, and do not go after other gods to serve them…”

To amend or reform is by definition “to put or change into an improved form or condition.”  This was something the people of Israel were commanded to do.

Reformation is an outward work of man changing his behaviors, and that results (or should result) in an inward change of heart.

Regeneration is an inward work of God (never man) that always results (to some extent) in an outward change in behavior.

1: the act or an instance of bringing something back to life, public attention, or vigorous activity

3: restored to a better, higher, or more worthy state

Regeneration is the doctrine of new birth in salvation.  It is worked in us by God, “according to His mercy,” when we are washed in the blood of Jesus.

Titus 3:5  Not by works of righteousness which we have done, but according to his mercy he saved us, by the washing of regeneration, and renewing of the Holy Ghost.

Revelation 1:5  and from Jesus Christ, the faithful witness, the firstborn from the dead, and the ruler over the kings of the earth. To Him who loved us and washed us from our sins in His own blood.

Regeneration is an act of God alone. It is given by Jesus when man repents and trusts in His finished work on the cross.  Regeneration is the “renewing of the Holy Ghost” (Titus 3:5b, above)–the quickening, or making alive, of a spiritually dead person:

Ephesians 2:1  And you He made alive, who were dead in trespasses and sins.

Ephesians 2:5  even when we were dead in trespasses, made us alive together with Christ (by grace you have been saved)

Regeneration is another way of speaking about the new birth that occurs in us when we are raised from the dead and born again in Christ.

John 3:3  Jesus answered and said unto him, Verily, verily, I say unto thee, Except a man be born again, he cannot see the kingdom of God.

1 Peter 1:23  Being born again, not of corruptible seed, but of incorruptible, by the word of God, which liveth and abides for ever.

Acts 2:24  Whom God raised up, having loosed the pains of death, because it was not possible that He should be held by it.

1 Corinthians 6:14  …God both raised up the Lord and will also raise us up by His power.

Colossians 2:12  Buried with Him in baptism, in which you also were raised with Him through faith in the working of God, who raised Him from the dead.

Romans 1:4 …declared to be the Son of God with power according to the Spirit of holiness, by the resurrection from the dead.

2) God the Son, Jesus, raised Himself.

John 2:19  Jesus answered and said to them, “Destroy this temple, and in three days I will raise it up.”

John 10:17  “Therefore My Father loves Me, because I lay down My life that I may take it again.

Fun with Shuns Book and DVD or iBook 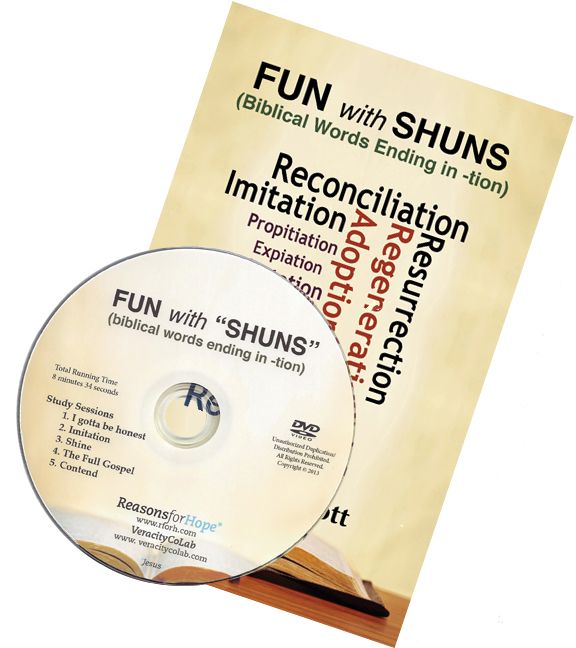