Did John the Baptist Doubt? 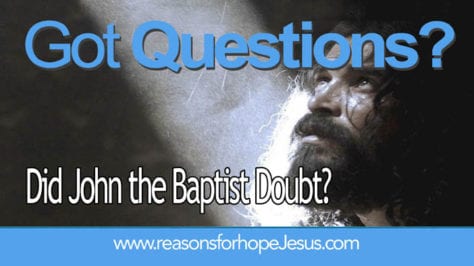 Many pastors and Bible teachers have commented from Matthew 11:2-6 that “even John the Baptist had doubts about Jesus?”  But is that true?  One well known Bible teacher even went so far as to ask, “ Was John in danger of throwing his faith overboard?” I believe that’s an unjustified question.  It dishonors a faithful servant of Christ, suggests something the Bible does not say, and plants doubt in the minds of Bible students.  Such a question is based on a presupposition that John’s faith wavered when he was imprisoned and therefore John doubted. But the Bible does not tell us that.

The apostle James tells us that if we do not have wisdom (i.e. answers, information) then we are to ask God (James 1:5), but we are to ask without doubting.

James 1:5  If any of you lacks wisdom, let him ask of God, who gives to all liberally and without reproach, and it will be given to him.

So, was John not trusting? Was he not believing?  Did John not believe that Jesus was the Messiah?  Did he not trust that God had sent Jesus?  Those who label John as doubting should carefully read John’s words in both Matthew and Luke.

Mat 11:2  And when John had heard in prison about the works of Christ, he sent two of his disciples
Mat 11:3  and said to Him, “Are You the Coming One, or do we look for another?”

Luke 7:19  And John, calling two of his disciples to him, sent them to Jesus, saying, “Are You the Coming One, or do we look for another?”

To attribute doubt to John, based on the question he asked, is without merit.  Clearly, John was asking for more information, but it does not say that he was not believing or not trusting that Jesus was the Messiah?  Let’s remember that we are talking about John the Baptist — the son of Elizabeth and Zacharias — and let’s consider what we know about him:

So, it’s clear that John knew who Jesus was in the womb. John was also faithful in following God’s calling for his life. And, John proclaimed Jesus to be the Lamb of God, trusting that He was the one who would “take away the sins of the world.”

Yet still, some suggest that in Matthew 11 John is doubting who Jesus is?  I would suggest John’s question was not expressing doubt. Starting with that premise, we should consider what reason John might have had for asking this question.

We know that since the call of Abraham, God had been raising up a people for Himself and preparing them for the time when He would send His Son.  God prepared them by revealing His purpose and plan, and His will and ways, to their leaders (Abraham, Moses, et.al.) and their prophets (Isaiah, Jeremiah, Ezekiel, Daniel, et. al.).  John was one of the Old Testament prophets (Jesus confirmed this: Matt 11:9-11).  John was raised up by God to prepare the way of the coming Messiah.  And, just as the prophet Habakkuk took his questions to God, John asked Jesus the question:   “Are You the Coming One, or do we look for another?”

God’s prophets foretold of a coming King who would liberate His people and then rule and reign.  In addition to the conquering King, the prophets also told of a suffering servant (Isa 53).  This servant would be rejected (Isa 53:3), wounded (Isa 53:5), and killed (Isa 53:8), but He would also heal their wounds (Isa 53:8), take their sins, and intercede for them (Isa 53:12). The prophecies were understood to reveal  Messiah ben David (Christ, the son of David), a conquering King, and Messiah ben Joseph (Christ, the son of Joseph), a suffering servant.

Also, during the time of John the Baptist, and during Jesus’ earthly ministry,  there was a sect of Jews known as the Essenes.  They preached that two Messiahs would come.  What they didn’t understand is that it would be one Messiah who would come two times — first as the Lamb of God, to minister and to redeem God’s people (Mark 10:45, John 18:36), and then a second time as the King of kings (Matt 25:31) to liberate them and to rule and reign.

I suggest it is much more likely that John was asking for clarification (in accordance with James 1:5-6).  He asked, “Are You the ONE to come [one Messiah’] or do we look for ANOTHER [a second Messiah]. He knew who Jesus was.  I believe he had no doubts.  But he did wonder if there could be another to come. This makes more sense than attributing doubt to John because we know John had great faith. Jesus said so.

The Faith of John

When John sent his messenger to Jesus with this question, Jesus sent back an answer.  He told that His works confirm who He is. That’s a great lesson for us.  Our works should confirm WHOSE we are.

Jesus continued by commending John.  He said, “…among those born of women there has not risen one greater than John the Baptist” (Mat 11:11)  Jesus was saying that John was greater than all men.  Why would Jesus have so highly commended John if John’s faith had wavered and he was doubting?  Remember Paul has told us: “…whatsoever is not from faith is sin.” (Rom 14:23)

None of us can absolutely know what was the condition of John’s heart and mind.  All we can do is read his words, consider what he might have been thinking, and reason about why he might have asked the question.  This is a great lesson for us.  We should never assign a personal interpretation to any text in the Bible.  Don’t state as a fact something that the Bible does not clearly define,

Whenever we are uncertain or confused, we should never waver or allow doubt to overtake us.  Instead, we should stand strong in our faith and seek God.  We should take our questions to God and ask Him to reveal the answers through His Word. He has promised to do so by the power of His Holy Spirit (John 14:26).

James 1:5-6  If any of you lacks wisdom, let him ask of God, who gives to all liberally and without reproach, and it will be given to him. But let him ask in faith, with no doubting…