Do these words describe Jesus? Offensive, Scandalous, and Arrogant. 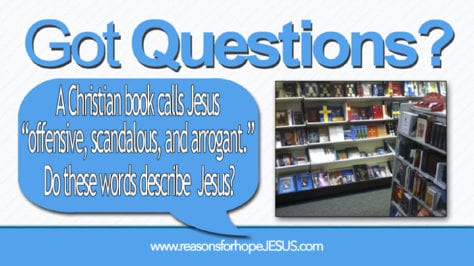 There’s a Christian book that attempts to support the idea that Jesus was offensive, scandalous and arrogant (among other adjectives).  Are these words that should be applied to Jesus?  Do these words accurately and appropriately describe Jesus?

The answer to this is quite simple. The answer is, NO!  Such words do not describe the Lord of Glory.  And, in no way do words like this magnify His name or honor Him.

Jesus Was Not Offensive

Jesus only spoke the truth.  He never lied and every word He spoke was spoken in love.  Some might say that Jesus’ words caused people to be offended — and that is true. People were offended by some of Jesus’ teachings.   However, that is an issue of the person hearing the Word and responding in a way that is close-minded and hard-hearted. They are offended because they are not willing to submit to the Bible’s authority. This would be a picture of a “stony soil” person, as described by Jesus in the parable of the soils:

Matthew 13:21  Yet hath he not root in himself, but dureth for a while: for when tribulation or persecution ariseth because of the word, by and by he is offended.

Jesus isn’t offensive.  But “because of the word” (because of the truth he spoke that they reject), they take offense and are offended.

The word, “offensive,” is very negative and should not be applied to Jesus.

Jesus Was Not Scandalous

While it’s true that Jesus spent time with the outcasts of society, and that certainly caused controversy, should we apply the word scandalous to our Lord?

Scandalous is defined as libelous, defamatory, or offensive to propriety or morality. Because true propriety and the standard of morality come from God’s Word, and because Jesus was faithful to His Father’s will, His precepts and His principles, Jesus does not fit this definition.  He was not libelous, defamatory or offensive.  People may have perceived Him to be such, but that does not make Him those things.  Plus (once again), these are words that dishonor the only perfect, pure and sinless man who ever lived so they should not be used to describe Him.

Paul reminds us to give honor to men who are deserving:

Romans 13:7  Render therefore to all their dues: tribute to whom tribute is due; custom to whom custom; fear to whom fear; honour to whom honour.

Jesus certainly lived His life in a way that deserves honor and that includes respectful and accurate words.

Revelation 5:12 …Worthy is the Lamb that was slain to receive power, and riches, and wisdom, and strength, and honour, and glory, and blessing.

Jesus Was Not Arrogant

Being arrogant is defined as exaggerating one’s own worth or importance, often by an overbearing manner, or showing an offensive attitude of superiority. Synonyms would be conceited, prideful, egotistic.

None of those words are descriptive of Jesus. And, because Jesus is God, it would have been impossible for Him to exaggerate His worth, and He certainly did not have an attitude of superiority. He was humble and He to serve and to minister to others:

Mark 10:45 For even the Son of man came not to be ministered unto, but to minister, and to give his life a ransom for many.

Why Use Such Words?

Why would a Christian writer attribute such words to Jesus (other than the obvious reason….shock value that will sell books)?

These negative words are rightly attributed to fallen man, but they do not describe Jesus. However, by attributing such words to Jesus, it does seem to make Him more like us.  While Jesus did live a human life, He was not just like us. He never sinned. Jesus was completely filled with the Holy Spirit and totally surrendered to the will of His Father. Jesus was perfect in all His ways and in all His words. We are being conformed to His image (Romans 8:29). We should not try to conform (describe) Him to be more like us.

It’s important to understand who Jesus was during His incarnation and earthly ministry and we can do that by sticking to how the Bible describes Him.  His attributes (which are the appropriate and accurate adjectives to describe Jesus) include holy, omniscient, omnipresent, eternal, sovereign, good, loving, true, faithful… and man more!  All positive and powerful descriptive words. We should never use words that describe fallen man to describe the Lord of Glory.

One more attribute from this book is in error. The book also calls Jesus an “outlaw.” “Outlaw” is defined as someone who is lawless, a fugitive from the law, living apart from or outside of the law. That’s not Jesus.  He kept the Law perfectly.  He was not an “outlaw.”  We are the outlaws.  We are the ones who break God’s laws, who are lawless fugitives from the law and live apart from or outside of the law.  Jesus lived the life we can not live. And then He died the death that we should die–all so that He could bestow upon us the love, mercy, and grace of God’s forgiveness of our sins and give eternal life to those who trust in Him.

In our culture today, it’s very popular to use titles and words to create shock value.  It’s done to get people’s attention and often for personal gain (to sell more books, increase movie attendance, etc.). While it might get someone to read about Jesus and learn more about Him, that end result does not justify the means (using dishonoring words).  We should always use words that honor Jesus and accurately represent who He is when we speak and write about Him.

God is greatly to be feared in the assembly of the saints, And [God is] to be held in reverence by all those around Him. (Psalm 89:7)

Read: What Names and Titles for Jesus are Found in the New Testament