The books of 1 and 2 Chronicles were originally one book until 180 B.C.  The Hebrew title for the books means “the words (affairs) of the days” and together they chronicle the history of Israel from Adam, to the Babylonian captivity, to Cyrus’s decree that allowed the exiled Jews to return to their land.  The two books can be thought of as a “miniature Old Testament,” and are noted for presenting the most extensive (through 9:44) collection of genealogical tables in the Old Testament.  The books record the ancestry of the tribes of Israel, they focus on the importance of the Davidic line from which Jesus descended (Saul 1051–1011 BC; David 1011–971 BC; Solomon 971–931 BC), they emphasize the priestly tribe of Levi, and they remind Israel of the importance of racial and religious purity.

History tells that Ezra led a group of exiles back to Jerusalem in 458 and that he was concerned about building a true spiritual foundation for the people. Perhaps to further that mission, he compiled the Chronicles to emphasize the importance of racial and religious purity, the proper place of the law, and the significance and sanctity of the Temple and the priesthood. It should be noted that Chronicles omits detailed activities of the kings and prophets, and rather focuses on the rich heritage of God’s people and the blessings of their covenant relationship to God.

First Chronicles is filled with genealogies and it focuses on the reign of King David including the great covenant with David in 17:11-14 and David’s magnificent prayer of praise in 29:10-19. 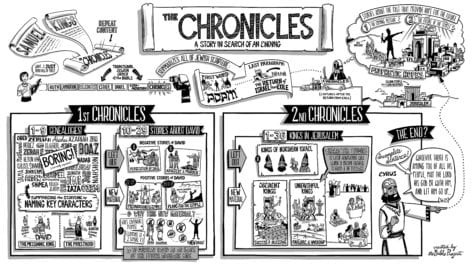