What is the Difference Between an Apostle and a Disciple? 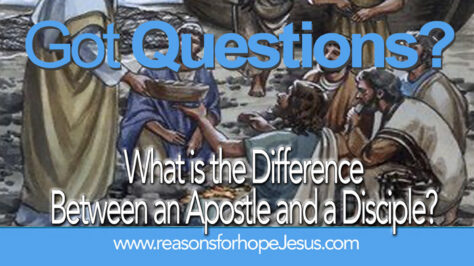 Let’s go back almost 200 years, when the Bible held greater influence in the world, and see how the dictionary defined apostle and disciple.   The 1828 Webster’s Dictionary defines them this way:

Apostle:  “A person deputed [appointed] to execute some important business; but appropriately, a disciple of Christ commissioned to preach the gospel.”
Disciple: “A learner; a scholar; one who receives or professes to receive instruction from another; A follower; an adherent to the doctrines of another.”

The 1828 Webster’s Dictionary elaborates on its definition of apostle by adding:

“Twelve persons were selected by Christ for this purpose; and Judas, one of the number, proving an apostate, his place was supplied by Matthias. (Acts 1:2)”

The Strong’s Dictionary defines the Greek word “apostolos” as:

“a delegate; spec. an ambassador of the Gospel; officially a commissioner of Christ [apostle] (with miraculous powers):–apostle, messenger, he that is sent.”

How Does the Bible Define an Apostle?

All twelve of Jesus’ disciples were chosen by God and given to Jesus (John 17:6).  “The Twelve” were men who walked and talked with Jesus during His earthly ministry.  After the apostasy and death of Judas, God chose another (by lot), named Matthias, to take Judas’s place:

Acts 1:26-2:2  And they gave forth their lots; and the lot fell upon Matthias; and he was numbered with the eleven apostles.  And when the day of Pentecost was fully come, they were all with one accord in one place.  And they were all filled with the Holy Ghost…

Acts 9:15  But the Lord said to him [Ananias], “Go, for he [Paul] is a chosen vessel of Mine to bear My name before Gentiles, kings, and the children of Israel.

1 Cor 9:1-2  Am I [Paul] not an apostle? Am I not free? Have I not seen Jesus Christ our Lord? Are you not my work in the Lord?  If I am not an apostle to others, yet doubtless I am to you. For you are the seal of my apostleship in the Lord.

3. An apostle had to be an eyewitness of the risen Christ

Eleven of Jesus’ commissioned and sent apostles remained faithful and they witnessed and spent time with the risen Christ.  So also was Matthias (Judas’s replacement) a witness of the risen Christ.

Acts 1:21-23 Wherefore of these men [the two candidates to replace Judas] which have companied with us all the time that the Lord Jesus went in and out among us, Beginning from the baptism of John, unto that same day that he was taken up from us, must one be ordained to be a witness with us of his resurrection.  And they appointed two, Joseph called Barsabas, who was surnamed Justus, and Matthias.

Paul also was a witness of the risen Christ.  On the road to Damascus, the risen Lord appeared to Him.

Acts 9:3-5  As he journeyed he came near Damascus, and suddenly a light shone around him from heaven.  Then he fell to the ground, and heard a voice saying to him, “Saul, Saul, why are you persecuting Me?”  And he said, “Who are You, Lord?” Then the Lord said, “I am Jesus, whom you are persecuting. It is hard for you to kick against the goads.”

And in the Third Heaven Paul spent time with the risen Christ.

2 Cor 12:2, 4-5  I know a man in Christ who fourteen years ago…was caught up to the third heaven….  how he was caught up into Paradise and heard inexpressible words, which it is not lawful for a man to utter.  Of such a one I will boast; yet of myself I will not boast, except in my infirmities.

4. An apostle possessed the God-given gifts to perform signs and wonders.

Luke 9:1-2  Then he called his twelve disciples together, and gave them power and authority over all devils, and to cure diseases.  And he sent them to preach the kingdom of God, and to heal the sick.

Mark 16:15-18  And He said to them, “Go into all the world and preach the gospel to every creature. He who believes and is baptized will be saved; but he who does not believe will be condemned.  And these signs will follow those who believe: In My name they will cast out demons; they will speak with new tongues;  they will take up serpents; and if they drink anything deadly, it will by no means hurt them; they will lay hands on the sick, and they will recover.”

Acts 2:43 Then fear came upon every soul, and many wonders and signs were done through the apostles.

2 Cor 12:11-12 …For I [Paul] ought to have been commended by you; for in nothing was I behind the most eminent apostles, though I am nothing.  Truly the signs of an apostle were accomplished among you [by Paul] with all perseverance, in signs and wonders and mighty deeds.

A simple definition is that a disciple is a student who learns from a teacher. An apostle is a disciple who is sent to deliver the teachings to others. Therefore, all of Jesus’ apostles were disciples; but not all of Jesus’ disciples were apostles.  It’s clear that first-century apostles differed from disciples. And it must be noted that Jesus’ apostles were more than just those sent by a teacher. They had spent time with Jesus and were given the power to perform signs and wonders which would authenticate their apostleship.

Our Calling as More than Disciples

In modern times, the term “apostle” is still used by some denominations to denote someone who is sent with the message of the gospel.  However, no one of our time really “fits” the biblical definition of an apostle.  Therefore a better title is “ambassador.”  An ambassador is a “sent one” and has the responsibility to perform work according to the will of the one who sent him, An ambassador is to represent the sender in his absence, and to deliver the words of the sender.  That fits our commission.  And in fact, this is how Paul defines our service:

We should think of ourselves as both disciples and ambassadors of the Lord Jesus Christ.  As disciples, we are “learners.”  As ambassadors, we are “sent ones.”

Continue to read and study the Bible to learn more about our Triune God. And, go forth as an ambassador for Christ, sharing the message of saving grace with all people. We are called and commissioned to herald the good news and to be messengers of hope.

Be bold: Acts 4:31 …they were all filled with the Holy Ghost, and they spoke the word of God with boldness.

And be faithful: Prov 13:17  A wicked messenger falleth into mischief: but a faithful ambassador is health.