The Totem of Salvation 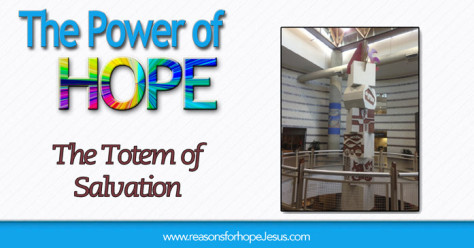 Totem poles are crafted from large trees or wooden poles, posts, or pillars.  They feature carved symbols or figures that tell a story, commemorate an event, signify a clan (lineage) or represent cultural beliefs.   Most people are familiar with the totem poles of the Native American Indians.  The word totem derives from the Algonquian language, in which the word odoodem [oˈtuːtɛm] means, “his kinship group.”

The Totem of Salvation

There’s a totem pole that I pass by several times each week.  It’s not carved of wood, nor was it crafted by Native American Indians. This totem is a magnificent stone sculpture that relays the most amazing story, commemorates history’s most significant event, signifies the life of one man and represents the most important of all beliefs.

My husband and I belong to a gym that is part of a network of Catholic hospitals.  In the atrium of the building is The Totem of Salvation — a 38′ high limestone totem pole with 14 biblical images etched into 7 stones and an eighth stone that proclaims hope.

The Totem of Salvation is an awe-inspiring work of fine art and it conveys the most beautiful message of amazing grace, telling of the life, ministry, death, burial, resurrection and return of the Lord Jesus Christ.

In contrast, on the wall surrounding the sculpture, an engraved quote relays a conflicting message.  I’ll share that quote, but first let’s consider the message of The Totem of Salvation and look at the beautiful way in which it is presented. 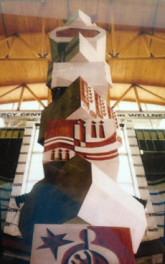 The Totem of Salvation  was sculpted by William Schickel (1919-2009).  Schickel worked by commission in painting, stained glass, sculpture and design and his works are housed in many museum collections, including the Vatican Museum.  It’s reported that “he loved
the totem’s ‘cinematic quality’ which allowed him to ‘tell a story’ through a series of images.” (www.WilliamSchickelGallery.com)

A plaque displayed in front of The Totem of Salvation tells the story that Schickel carved into stone.

1) The FIRST STONE is sculpted with two images—the Incarnation with the star, the Child, and the mother—and the Menorah which recalls the Jewish tradition out of which Christianity is born. 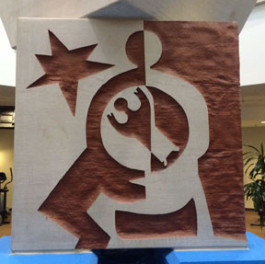 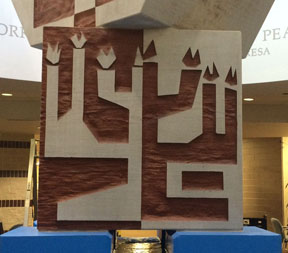 2) The Child Jesus among the Elders is portrayed on the SECOND STONE. 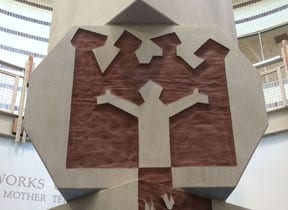 3) The THIRD STONE has two images of baptism and water.  The first is Christ’s baptism in the Jordan.  The second is a Paschal candle being dipped in the water of baptism. 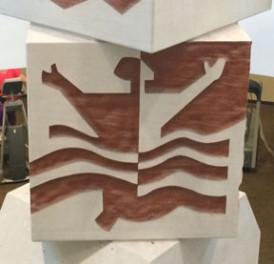 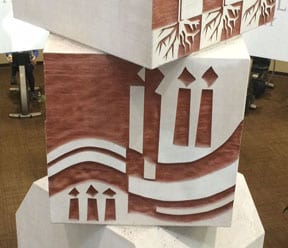 4) Three images related to the parable about the Sower of the Seed bring the FOUTH STONE TO LIFE.  A seed is shown falling among thorns, then on stony ground and, finally, on good ground. 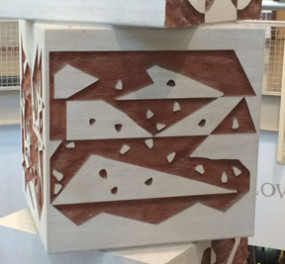 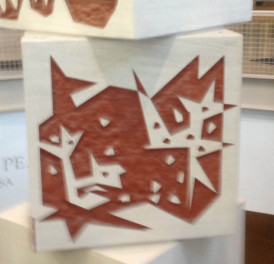 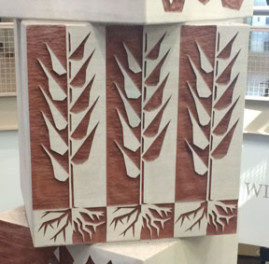 5) Eucharistic images of water and wine, loaves and fishes, dominate the FIFTH STONE. 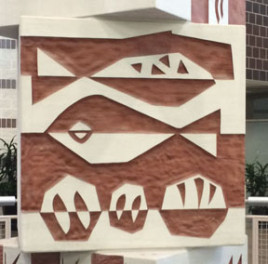 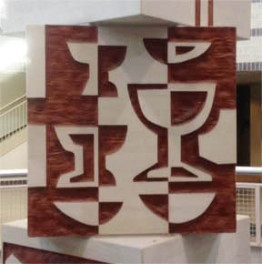 6) The SIXTH STONE is the stone of the Crucifixion of Christ with two images, one of the cross itself and the other of the body on the cross. 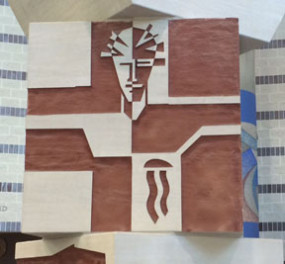 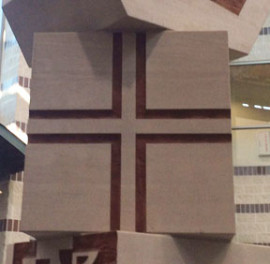 7) The hope and glory of the Resurrection bring meaning to the SEVENTH STONE with the image of the buried Christ and then, triumphantly, the powerful image of the empty tomb. 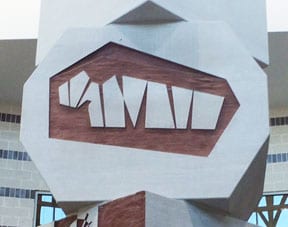 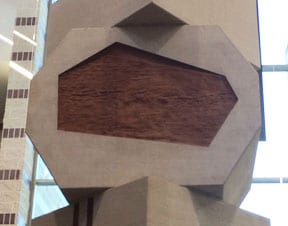 8) There are no images sculpted into the EIGHTH STONE.  It is the final and top stone which holds intersecting metal plates symbolizing the Resurrection (rebirth) and Parousia (final coming). 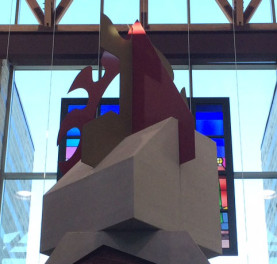 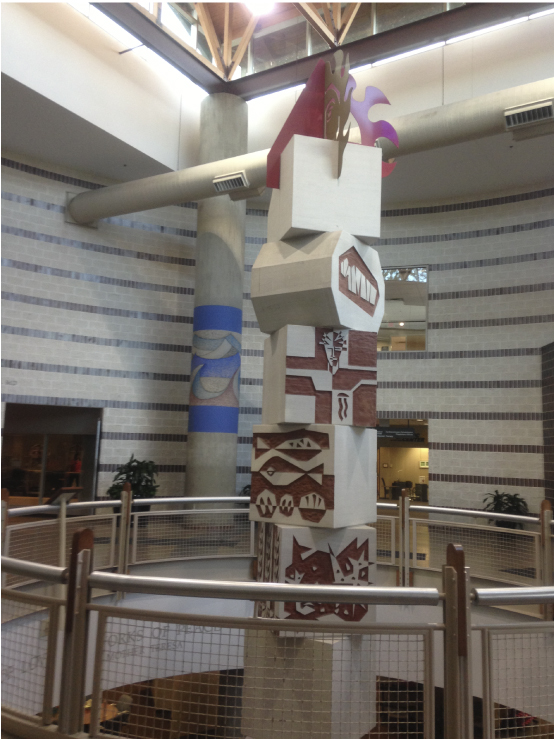 Both beautiful and interesting is the progression of thought and the biblical teaching of each sculpted stone.  In my mind, the overall design of the totem pole represents the vertical relationship between God and man through the Person of the Lord Jesus Christ.  I can only wonder if the number of stones was purposefully set at eight to illustrate the significance of the biblical meaning of the number.  In the Bible, the number eight clearly represents new beginnings.

Now, let me reveal the engraving on the the wall that surrounds the beautiful Totem of Salvation.  The quote is from Russian novelist, short story writer, essayist and philosopher, Fyodor Dostoyevsky.  The words engraved on this wall stand alone and are removed from any context, so their meaning can only be inferred by the actual words. The quote is, “BEAUTY WILL SAVE THE WORLD.”  —Dostoyevsky 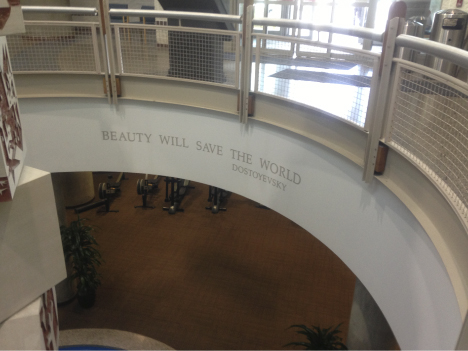 This speaks in contrast to the message of saving grace found in Jesus Christ, the Person of whom the totem speaks.  No “beauty” will ever save the world.  It might make it a lovelier place in which to live, but only the Lord Jesus Christ can redeem a lost soul and a cursed world.  Jesus came to earth and lived a perfect life and offered Himself as a sacrifice to redeem man and one day He will come again in glory and will make all things new…and truly beautiful!  Unless “Beauty” is a reference to Jesus, the words “beauty will save the world” are without merit.

Because this quote is on the wall of a health club, it’s was likely chosen to encourage members to be physically fit.  Now, don’t get me wrong…that’s a very good thing.  As Christians our bodies are temples of  the Holy Spirit and we are to care for them.  Even for non-Christians, the human body is an amazing gift from God.  Everyone should be diligent in taking care of their bodies.  But shouldn’t it be the beauty of the One who lived and died for us that motivates us…not the outward physical beauty of what we can achieve?

Consider the Dostoyevsky quote.  It should remind us of a more biblically accurate quote, “beauty is fleeting.”  Those words come from the 31st chapter of Proverbs in the New International translation of the Bible (translated “beauty is vain” [meaningless] in the King James Bible).  How very true.  Physical beauty is fleeting.  It does not last, it is meaningless, and it will never satisfy.

Consider now the message of The Totem of Salvation.  It should remind us that, while we have eternal spiritual life, our bodies are aging and dying (entering a health club is also a good reminder of that). Because of the original sin of Adam, we were born spiritually dead and physically dying, but The Totem of Salvation holds the true message of beauty: Jesus offers the gift of salvation and spiritual life to all who come to Him in faith and for those who receive Him He will one day give them a new, most beautiful, and glorious body (Philippians 3:21).

As Christian, we know that beauty is fleeting, meaningless and without any power to save the world.  We also know that while our bodies are dying, it’s okay….because we can remind ourselves:

My life is hid in Christ (Colossians 3:3)

All is well with my soul (Philippians 4:11b)