Philemon is another Prison Epistles (like Ephesians, Philippians, and Colossians).  It was written during Paul’s first imprisonment in Rome. Paul writes to Philemon out of concern for Onesimus (Philemon 1:10), Philemon’s slave who had stolen from his him and then run away. Philemon made his way to Rome, where he met the apostle Paul and was led him to faith in Christ (v. 10). Onesimus was now faced with doing his Christian duty toward his master by returning to him.  Knowing that death would be the normal punishment for Onesimus’s crimes, Paul wrote this letter to Philemon to interceed on Onesimus’s behalf.

The Colossian church had other slaveholders in addition to Philemon  (Col. 4:1).  So, while Paul wrote specifically to Philemon, this letter gave guidelines for all relationships between Christians and their slave brothers. Paul asked Philemon to be guided by the principle of Christian brotherhood in dealing with Onesimus (v. 16).  Paul offered to pay for whatever Onesimus owed. Paul did not deny the rights of Philemon over his slave, and this letter was not an attack against slavery.  Paul’s words in this letter were meant to instruct about how Christian masters and slaves could live their faith within the system. It is possible that Philemon freed Onesimus and sent him back to Paul (v. 14). Some suggest that Onesimus became a minister and later bishop of the church at Ephesus.

The letter Paul wrote to Philemon is the most personal of all his letters. 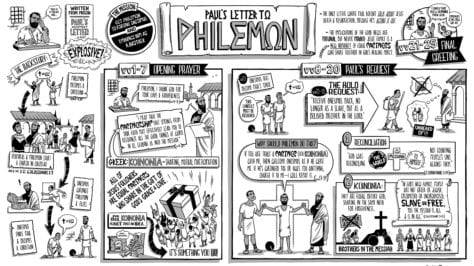