Messing with the Words of the Word 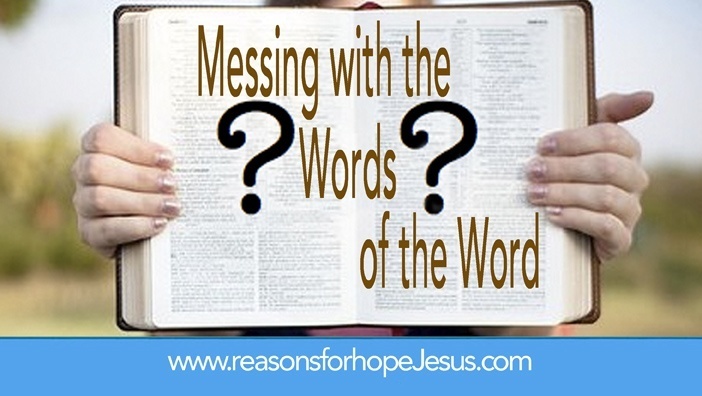 It has become all too common to see someone’s attempt to offer a new Bible for the bookstore shelves. In the “Bibles” section  there are so many different Bible versions that it’s difficult   to figure out which one to purchase.

Why so many Bibles?

Several years ago, World Magazine exposed what they called, “The Stealth Bible.” Flying in under the radar was this new, so-called translation that emphasized “complete equivalence” instead of “word-for-word” translation work. And not only “thought-for-thought” being applied to the Bible text but also, “gender-neutral” wording.

It’s time to stand up and recognize that there are those who are adulterating the Word! They are messing with the words of the Word! Sadly, many Christians are not discerning as to what is happening to the precious “words” of God’s Word.

Be Mindful of the Words

The apostle Peter wrote, ”Beloved I now write to you . . . that you may be mindful of the words which were spoken before by the holy prophets.” (2 Peter 3:1-2 – NKJV)

The late Dr. Henry Morris writes, “There has long been a tendency for certain Bible teachers to water down the doctrine of verbal inspiration by arguing that it is the ‘thoughts’ of Scripture that count — not the precise words.  They forget that the transmission of specific thoughts requires precise words. Ambiguous language is bound to produce fuzzy thinking and uncertain response.”

Just as it was in the past, there  thre is a present day movement to make the Bible say what many would like it to say. Dr. Wayne Grudem has written that, “there are many . . . changes – literally thousands – that should cause evangelicals much concern.” He appeals to the church to take note.

Messing with the Words

There is a growing movement to not only paraphrase Scripture to to publish thought-for-thought translations,but also to  “re-word” the Bible. As the preface of the NRSV states, it was “required that ‘masculine-oriented’ language should be eliminated.” Such terms that seek to call God “Father” are desired to refer to God as “Parent.”

The NRSV was one of the first, if not the first, revisions that used “gender-neutral” language.  It was  followed by many others, including the New Living Translation and the New Century Version. There are more, and they will keep coming.

The “gender-neutral” revision of the NRSV renders it:
“He keeps all their bones; not one of them will be broken” (Psalm 34:20 – NRSV)

As Dr. Grudem has noted, “The individuality of the Messianic prediction, so wonderfully fulfilled in Jesus’ death, is lost to readers of the NRSV. And the NCV, NLT, and NIVI all have “their bones” as well, even though the statement is singular (“his bones”) in Hebrew.”

This is a serious matter! I raise a flag of deep concern to every brother and sister-in-Christ. Revelation 22:18-19 warns of messing with the words of the book and tells of consequences for doing so.

It should not surprise us that in our post-modern culture there are those within the Christian community that tend to flaunt their right to take that which is sacred, that which will not pass away (Mark 13:31), and re-structure it to serve their own fallen purposes.  That’s why we are told to “prove all things; hold fast that which is good.” (1 Thessalonians 5:21).

Take note Christian! The words of the Word are from the breath of God and not to be messed with!

May we take a stand and declare loudly our commitment to hold fast to the accurate translating of the holy writings that have been committed to our care by our holy God. Tell publishers to stop messing with the words of the Word. Hold fast to sound word-for-word translations.