How to Overcome Fear? 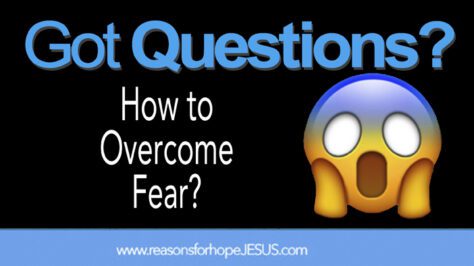 When fear grips us, where do we look?  The Bible teaches us a great lesson about the importance of looking to Jesus (don’t miss the video below).

When I think of mind-controlling fear that leads to sin, I think of the apostle Peter. Questioned by a servant girl, who was keeping the door of the high priest’s palace, Peter denied the Lord.

Did Peter fear this young girl?  No.  His fear was of the Jewish authorities. He feared what they might do to him. And sadly, his faith was overcome by fear.

After Peter denied the Lord to the servant girl, Peter warmed himself by the fire. Questioned again, he answered the same. Out of fear; Peter again denied the Lord.

Finally, Peter was confronted by one who knew the truth, one who was present in the garden when Peter attempted to defend the Lord, But once again, sadly Peter lied. He denied the Lord…and everyone knows the rest of the story.  The cock crowed (John 18:27).

The Face of Fear

What happened to Peter’s faith in the face of fear?  Only a short time earlier, he had stood valiantly next to Jesus, ready to defend and protect him.  But his faith had waned and he allowed fear to control his mind, his words, and his actions.

Peter took a place in the world, warming himself at a Roman fire, in a Roman courtyard, surrounded by Roman officials, disillusioned by circumstances and fearing for his safety. Peter joined those who were of the world, and he lost sight of Jesus.  He allowed fear of man to be a snare and his trust in the Lord floundered.

The Face of Faith

Prov 29:25  The fear of man brings a snare, But whoever trusts in the LORD shall be safe.

At all times, and in all things, we must put our confidence in Him.  We must not allow the world to take us captive.

When we keep our eyes on Jesus and devote our hearts to Him, “we can boldly say, The Lord is my helper, and I will not fear what man shall do unto me.” (Heb 13:6)  Therefore, we can “be of good courage, [for] He shall strengthen your heart, All you who hope in the LORD” (Psa 31:24).

Trust in the Lord

The psalmist (probably David) wrote, “It is better to trust in the LORD than to put confidence in man.” (Psa 118:8)  Why? Because God is always faithful to His promises, man is not.  God is truth and love, but man is corrupt, selfish, and untrustworthy. The only one who is worthy of our full trust and confidence is the Lord. And when we put our trust in Him, we grow in faith, and in character, and we honor God.

To trust God in the light is nothing, but to trust him in the dark — that is faith.  — Charles Spurgeon

God’s Word tells us that fear and faith cannot co-exist.

1 John 4:18  There is no fear in love; but perfect love casts out fear: because fear has torment. He that fears is not made perfect in love.

Peter learned this lesson at another fire. It wasn’t a Roman fire in the dark of night.  Rather it was a fire prepared by the Lord, in the light of morning.  As Peter sat by the fire, in the Lord’s presence, he affirmed his love for Jesus. (John 21:9-17)  Jesus restored Peter to a mission of service and Peter’s heart and faith grew three sizes that day! (John 21:15-17)

For Peter, the power of love cast out the fear of man. This was demonstrated only a short time later when Peter stood before authorities who sought to control him and stop him from preaching. In faith, Peter stood strong.  He put his confidence and trust in the Lord, and he boldly testified.

Acts 5:27-28  And when they had brought them, they set them before the council. And the high priest asked them, saying, “Did we not strictly command you not to teach in this name? And look, you have filled Jerusalem with your doctrine, and intend to bring this Man’s blood on us!”

Acts 5:29-32  But Peter and the other apostles answered and said: “We ought to obey God rather than men. The God of our fathers raised up Jesus whom you murdered by hanging on a tree. Him God has exalted to His right hand to be Prince and Savior, to give repentance to Israel and forgiveness of sins. And we are His witnesses to these things, and so also is the Holy Spirit whom God has given to those who obey Him.”

Acts 5:33  When they heard this, they were furious and plotted to kill them.

Instead of killing Peter and the others, the authorities beat them and commanded them not to speak in the name of Jesus.

So what did Peter and the others do?

Acts 5:42  And daily in the temple, and in every house, they did not cease teaching and preaching Jesus as the Christ.

Now that’s real faith in the face of fear.

What Fear are You Facing?

Whatever it might be, always remember that, because you are in Christ, you are an overcomer.  Kill the fear, for it is from the father of lies.  Turn your eyes upon Jesus. And look to Him for love to cast out all fear.