Who said…”God is a symbol of myth-making?” 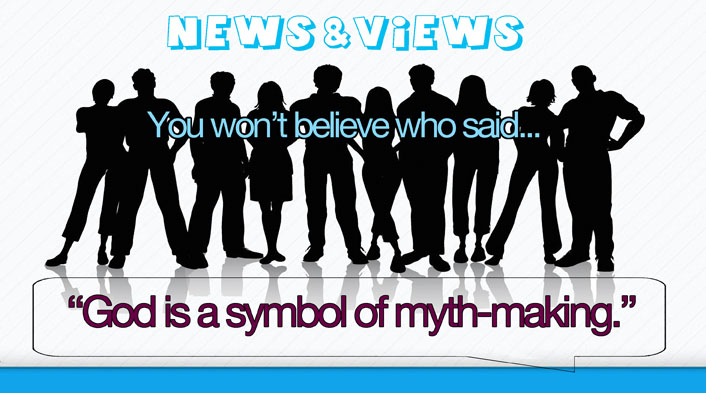 This story broke four days before Palm Sunday.  I was appalled by the statements made and I wanted to share them with you.  However, I did not want to darken the remembrance of Jesus’ last week on earth with such dishonoring remarks about our great God.  So I delayed, and share this now.

With the remembrance of the holiest of days fresh in our minds,  and the joy of our salvation flooding our thoughts, we wonder how anyone could make remarks such as this:

Religion is a human construct.

The symbols of faith are products of human cultural evolution

Jesus may have been an historical figure, but most of what we know about him is in the form of legend.

God is a symbol of myth-making and not credible as a supernatural being or force.

The Bible is a human product as opposed to special revelation from a divine being.

Human consciousness is the result of natural selection, so there’s no afterlife.”  (1)

So who do you think might have said these things?

Was it a famous atheist?  They are so vocal and confrontational these days.

Was it a secular humanist? They are always trying to prove that science is all there is.

Was it an agnostic?  It really shouldn’t be, because they’re always claiming they don’t have enough information to make informed decisions and these comments seem to be made without doubt.

The comments are so derogatory about God that we can easily rule out those who adhere to other (non-Christian) religions.  I would venture to say that most followers of other religions are not this dishonoring in their words about God. Plus, most religions believe in an afterlife, so the statement “there’s no afterlife” would rule out non-Christian religions.

So are these words from a famous atheist or secular humanist?  Well…the source of these words will surprise you.

How Can It Be?

The above is a direct quote from a Presbyterian minister (PCUSA).  His name is John Shuck and he is the minister of a church in Oregon (He’s only been there since January 2015, but previously he served at many other churches)

He is graduate of Princeton Theological Seminary and his online bio states this:

“John has been involved in the work of the Westar Institute (the Jesus Seminar).

John is a signatory of the Clergy Letter Project that advocates scientific literacy including teaching Evolutionary Theory.  John’s favorite Sunday is Evolution Sunday on the Sunday closest to Charles Darwin’s birthday.” (2)

“One of John’s passions is advocacy for gay, lesbian, bisexual, and transgender persons in the church and in society.   He is on the coordinating team for Presbyterian Voices for Justice and is honored to serve a congregation that is More Light and fully inclusive.” (3)

By now you might be thinking this can’t be true and wondering how it could be possible for a “man of the cloth” (an old term for an ordained pastor/minister) to not believe in God and the Bible?

Well, your guess is as good as mine.  This report is true, and I have no idea how someone could be ordained without believing in God or His Word.

In a guest post on The Friendly Atheist’s Blog, John Shuck added (after stating the beliefs quoted at the beginning of this article):

“In short, I regard the symbols of Christianity from a non-supernatural point of view. And yet, even though I hold those beliefs, I am still a proud minister. But I don’t appreciate being told that I’m not truly a Christian.” (2)

What?  He claims to be a Christian?  There’s a real disconnect here.  He also says he’s “still a proud minister.”  A minister of what?  Being a Christian means believing in who Jesus Christ is, what He has done and what He has said in His Word.  What is the man ministering if he is not sharing about Jesus and the Word of God?

We can only wonder, was this man at one time saved by Jesus and now he has renounced his faith?  Or was he never saved by Jesus and regenerated to newness of life?  We cannot answers those questions because we cannot judge his heart.  However, we can certainly judge his words and works, and on that basis he should be disciplined, as was done in years past, by defrocking (an old term for removing someone from the pastorate/ministry).

What Can We Do About Such Things?

I’m sure you now understand why I did not want to share this during the holiest week of the year—a week in which our thoughts and words should be diligently focused on what Jesus did during the last week of His earthly life and ministry.

I share this today to ask you to pray for John Shuck and other people like him.  Those who claim to be Christians by their works, but reject the truths of God (and in this case, God Himself), are either deceived or unregenerate.  The foundation of Christianity is not our love for our neighbor and our good works for them.  The foundation of Christianity is a Person–the Lord Jesus Christ.  Only by knowing Him can one stand firm, and trust, in what God teaches.  Jesus is our rock-solid foundation.  All else is sinking sand.

The world is moving away from God faster than we ever imagined, and too many “churches” are conforming to worldly beliefs and practices.  Pray that Jesus-loving, Bible-believing Christians will boldly proclaim God’s truth and Jesus’ saving grace to a lost and dying world (and to any Christians who are deceived).

We need a revival in our country…and we need it now.  Stand up, as Isaiah did, and say to the Lord, “Here am I, send me.” (Isaiah 6:8)  Put on the whole armor of God and go forth in battle, praying always…

….that utterance may be given to me, that I may open my mouth boldly to make known the mystery of the gospel, for which I am an ambassador in chains; that in it I may speak boldly, as I ought to speak. (Ephesians 6:19-20)

If you missed these articles/video, take a minute now:

Surely this was a righteous man. (song from the centurion at the foot of the cross)

Are you Glad to see Jesus?

Why do we call it good [Friday]?

Is “The Folded Napkin” (an Internet forward) true?