Where Were the Disciples When the Holy Spirit Was Given? 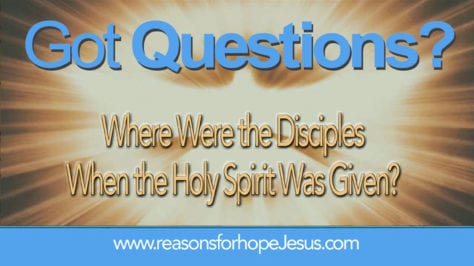 This is a great question.  Unfortunately, this is a question for which there is no definitive answer.  The Bible simply does not give us a clear answer.  But while the Bible does not tell us where the disciples were when the Holy Spirit was given, it does tell us the day.  The Holy Spirit was given on the day of Pentecost (Acts 2:1).  Pentecost is the English name for the Jewish Feast of Shavuot (read What is Shavuot?  Is there a prophetic aspect to it?).

Shavuot is the first-fruits celebration of the wheat harvest. This festival is also called the Feast of Weeks, since it is seven weeks, plus one day, after Passover.  The English word “Pentecost”  derives from the Greek pentekoste, with the root “pente” meaning fifty.  This is an appropriate name since the seven weeks plus one day equals fifty days.

Acts 1 tells us that forty days after His resurrection, Jesus ascended from the Mt. of Olives to Heaven, after which the disciples returned to Jerusalem and gathered together in an upper room.

Acts 1:12-14  Then they returned to Jerusalem from the mount called Olivet, which is near Jerusalem, a Sabbath day’s journey. And when they had entered, they went up into the upper room where they were staying: Peter, James, John, and Andrew; Philip and Thomas; Bartholomew and Matthew; James the son of Alphaeus and Simon the Zealot; and Judas the son of James. These all continued with one accord in prayer and supplication, with the women and Mary the mother of Jesus, and with His brothers.

While this tells that they were gathered in an upper room, it must be remembered that this was only 40 days since the day of resurrection (Acts 1:3).  The Holy Spirit was given on the Feast of Shavuot, which was 50 days after Passover.

The Day of Pentecost

Moving forward to the day of Pentecost, we are told:

Acts 2:1  And when the day of Pentecost was fully come, they were all with one accord in one place.

All we are told is that “they were all with one accord in one place.”  In what place?

Christian tradition says that it was the upper room—the same place where Jesus celebrated the Passover with His disciples (Mark 14:15; Luke 22:12).   While it is thought by many that this is the same place to which the disciples went after Jesus ascended to Heaven (Acts 1:13), it should be noted that the Greek terms Luke used in his Gospel and in Acts are different.  As a well-educated man, Luke was very precise in his writings so we must consider that these two places might have been different.  Plus, there is nothing that supports the “one place” mentioned in Acts 2:1 as being the upper room of Acts 1:13. Tradition might make that claim but the tradition that has been handed down does not date back to the time of Jesus’ death.  The claim does not even predate the Byzantine period (5th century A.D.).

Additionally, Luke’s account in Acts suggests the disciples might have been gathered elsewhere.  Chapter two begins with, “When the Day of Pentecost had fully come…”  This moves the time frame forward and could also indicate a different location than that spoken of in chapter one.

So where were the disciples and the gathered followers of Jesus on Pentecost?  The Bible mentions the “house where they were sitting” (Acts 2:2), and because of that many have assumed this meant the upper room.  However, there is another interpretation of what that “house” might be.

Rather than the upper room of a house, it is thought that this might have been a reference to THE House, the House of the Lord.  In ancient Jewish sources (the Mishna and the Talmud), the Temple Mount is referred to as “the mountain of the house” and throughout the Old Testament, we find “the house of the Lord” used to describe the Tabernacle, Solomon’s Temple, the Second Temple, and the future Millennial Temple.

Luke’s use of the phrase in Acts 2:2 might have been a direct reference to the first century Temple that stood on the Temple Mount.  Luke previously recorded, in his Gospel, that after Jesus’ ascension, the disciples remained in Jerusalem and “were continually in the temple blessing God” (Luke 24:52,53).  This indicates that the Temple was still the center of worship and considering that the time of Shavuot/Pentecost centered on Temple worship, it seems likely to explain the large crowd that was gathered to be obedient to God’s prescribed commands (Deut 16:16).

This would account for the number of people present, who heard the testimony of the disciples, and responded in faith:

Acts 2:41  Then they that gladly received his word were baptized: and the same day there were added unto them about three thousand souls.

Josephus, a first-century Jewish historian, confirms that the population of Jerusalem swelled at Pentecost as Jewish pilgrims came from all over the countryside (War 1:253; cf. 2 Maccabees 12:31,32).   And Luke confirms this in Acts 2:9-11 when he told from where they had come, “Parthians, and Medes, and Elamites, and the dwellers in Mesopotamia, and in Judaea, and Cappadocia, in Pontus, and Asia, Phrygia, and Pamphylia, in Egypt, and in the parts of Libya about Cyrene, and strangers of Rome, Jews and proselytes, Cretes and Arabians…”

Additionally, when Peter called the people “to repent and be baptized in the name of Jesus” (Acts 2:38), both his sermon and the events of the day suggest a public location, rather than a private upper room.  And it’s likely that the only place in Jerusalem where such large crowds could have gathered on the Day of Pentecost would have been the Temple Mount.

With 3,000 people responding to Peter’s call to “repent and be baptized” (Acts 2:41), it seems plausible that the location was the Temple.  There were ritual immersion pools around the southern and southwestern portions of the Temple Mount that serviced the pilgrims entering the temple (cf. Luke 2:22; Acts 21:24) and these would have been large enough to accommodate the pilgrims assembled there during Shavuot/Pentecost.

The Temple or the Upper Room?

The answer is, we just don’t know.  While it might seem that the Temple would have been the most feasible place to accommodate such a large gathering, we must accept that the Bible does not tell the location where the Holy Spirit was given.  Why?  Because the location is not what is important.

John 14:16-17  “And I will pray the Father, and He will give you another Helper, that He may abide with you forever; the Spirit of truth, whom the world cannot receive, because it neither sees Him nor knows Him; but you know Him, for He dwells with you and will be in you.”