We know nothing about the prophet Malachi.  There is no historical record of him, nor is any genealogy given.  We do know that his name means “my messenger” and he does exactly that.  He delivers the message that God has given him.  In the 55 verses, God is referred to in 53 verses.  Malachi presents God as a Father who has spiritual children who do not return His love.  Because their hearts were not devoted to God, their families were not devoted to God.  The people chose lethargy over legacy, apathy over adoration.

Malachi prophesied about 100 years after the return of the Jews from Babylon to Jerusalem. The city and the second Temple had been built, but the initial enthusiasm of the people had diminished. Following revival under Nehemiah (Neh 10:28-39), the people and priests had backslidden to the point of making unworthy offerings (Mal 1:7) and being delinquent in their tithing (Mal 3:8), and yet they could not understand why God was dissatisfied with them.

Malachi rebuked the people for their neglect of the true worship of the Lord  (Mal 1:6) by using a question-and-answer method (23 questions in this book). Malachi also called God’s people to repentance (Mal 3:7). 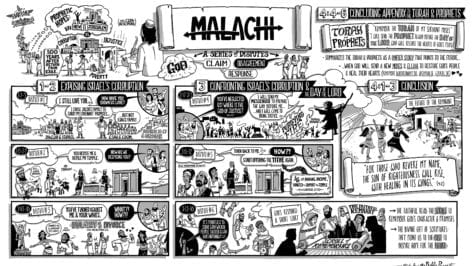