Is this TV show heresy, blasphemy or acceptable contextualization? 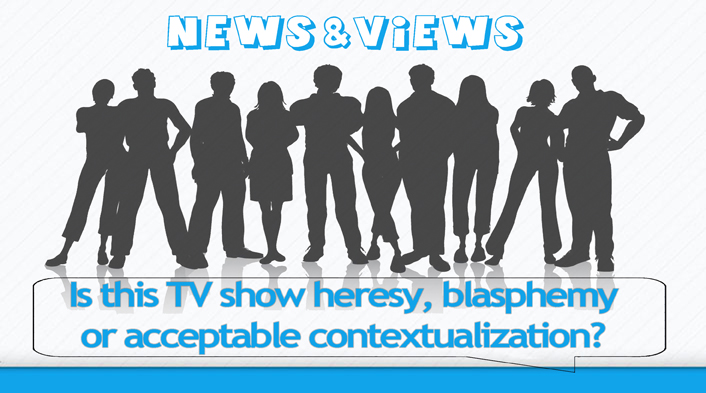 Christian be aware!  Parents be aware!  You decide if this show is heresy, blasphemy or acceptable contextualization.  We really want your opinion about this.

What effects might this show have on non-Christians, young Christians and especially impressionable children?

“Black Jesus,” a new TV show on the Adult Swim channel depicts Jesus as never before.  I don’t have that cable channel, and I’m sure it airs many questionable shows, but this new series is one that Christians should be aware of and should have an opinion on.  So we would like your opinion!

The show is described by imdb.com as “A TV series [that] finds Jesus living in present day Compton, CA on a daily mission to spread love and kindness throughout the neighborhood with the help of his small but loyal group of downtrodden followers.”   Now that might not sound too bad (other than the fact that it is totally fictional and Jesus is a historical figure, not a fictional character), but that’s not a very accurate description of what this show is about.  The Adult Swim channel reveals the extremes to which this show goes to make this show culturally relevant to some people.  Adultswim.com describes the first two episodes this way:

The gang talks Jesus into coming along on a drug buy financed by Boonie’s mom.

EP 2 FISH AND THE CON MAN

Vic vows to remove Jesus from the neighborhood, and hires Lloyd to be his “eyes and ears in the streets” and keep tabs on him.  Mean while Jesus and the gang find the perfect lot for the garden, only to face instant extortion from local Mexican gangsters.

Be aware that the Jesus character in the show uses profanity and gets high.  Other characters use the “n” word, the “f” word and they blaspheme the name of God (none of this is in the video trailer below).  So what kind of reaction are people voicing to this show?

David A. Rodgers, pastor of the House of Prayer for All Nations Ministries in Chicago, Illinois posted this letter on his Facebook account and announced his intent to distribute it “to every church in America.”  The letter is addressed to Turner Broadcasting, the company that owns the Adult Swim channel:

“We, the Christian community are vehemently opposed and violently offended at this upcoming program soon to air on your channel called, ‘BLACK JESUS.’ The level of disrespect aimed at the depiction of our Lord and Savior is inexcusable. We are hard pressed to find any value in this program, its message or its purpose. As a group of believers, we are prepared to launch a mass campaign and boycott of your channel and any advertisers that are financially profiting from this program. These continued attacks against our Christian values and the degrading imagery of the Lord Jesus Christ, will be met with social media awareness to the entire Christian community and a targeted boycott of your advertisers.

“There is no way that this show would be aimed at the Jewish or Muslim community. We are demanding an IMMEDIATE retraction of this show and a PUBLIC APOLOGY to the Christian community at large. We will continue to make our community aware of your blatant disrespect until there is a redemptive shift in the culture of your channel and programming. Please understand that we will not take this lying down. We will fight this and any other program that seeks to demean our values, our Savior and our beliefs. A draft of this letter is being distributed to every church in America.”

Rodgers’ letter, along with a request that spiritual leaders copy and sign and send a letter to Turner Broadcasting was posted on his Facebook page on Monday, July 21.  On September 1st, it had only 208 shares.

While this pastor has voiced his condemnation of the TV show, the Christian Post cites some surprisingly mixed reviews, in the following report [1]:

Bill Donohue, president of the activist organization the Catholic League, known for railing against troublesome pop portrayals of Christianity, surprisingly referred to the “Black Jesus” title character as a “mixed bag” with “many redeeming qualities.”

…Though skeptical at first and expecting to be hit with “another one of these trashy Jesuses,” Donohue said he was able to watch “Black Jesus” and look past the off-color language and mannerisms because the lead character’s divinity is recognized.

“What matters to us…is the presentation of Jesus. And Jesus does come across in terms of his own presentation as being Jesus,” said Donohue. “He’s kind, he’s respectful, he asks people to reach out to people. He’s very forgiving.”

Most importantly, “They don’t make fun of Jesus.”

… Donohue could care less about the “race” question, and said in response, “The idea that Jesus has to be white, or pale, or black, or Asian or whatever, that’s irrelevant to the Catholic League.”

What Donohue does find relevant is the potential of “Black Jesus” to introduce the Christian savior to an otherwise unreachable demographic during its 11 p.m. broadcast.

“There is a young, male segment. Let’s face it, that’s the target audience, we know this from past experience dealing with the Cartoon Network and Comedy Central and the like,” he explained. “And you’re not going to reach them with Jesus’ message through the normal channels, through the normal citing of the Gospel. Now it’s unfortunate, it’s not a good sign in our culture that you have to debase Jesus’ statement and his delivery in order to be sold to this segment of the population.”

….Donohue returned to what he considers the bottom line: “Jesus’ message is getting delivered.”

“You have to be able to look past some things,” he added. “I’m not saying I like it, but I’m saying to Christians, ‘Take a deeper look at this. Take a look at the whole picture. Take a look at the intended audience. And if young men can get the message of Jesus…maybe they can get it that way now. Maybe when 10 years come by and they get a little older and they start having children, maybe that message will stick with them more than the actual presentation.”

Eric Canaday, an author and pastor in Aurora, Colorado, did watch the premiere episode, twice, and seemed to find “Black Jesus” bittersweet.

“When you think about people’s faith in God or religion or even in Jesus Christ, many times Jesus Christ shows up in situations that really aren’t ideal. So if you have someone who’s grown up in the hood, or in Compton — now I’m not from Compton, so I can’t speak for Compton. But I did grow up in a single-parent household with a lot of friends and family members who were maybe involved in drug culture or close to some issues of homelessness. And the message that you get, especially if you grow up in church, is that God cares, Jesus cares. And this Jesus is the type of Jesus that shows up in a place of struggle, with some compassion but with honesty.”

He added, “I’ve been around people, or grown up with people, who would talk about Jesus one second, and then use cuss words the next moment. And that is just a true reflection of how people process and view Jesus. The show is funny.”

…Canaday added, “I don’t think Aaron McGruder’s goal is really to communicate necessarily the Gospel, although one of the things that I see in the show is that he frequently refers back to integrity, love, compassion for all mankind.”

“Black Jesus” actually presents Christians with a unique opportunity, according to Canaday.

“This particular show gives Christians, I think an opportunity to speak to some of the endearing qualities about Jesus, meaning some of his non-judgment and willingness to meet people where they are,” he explained.

It’s interesting that in neither of these reviews, by men who claim to know the Lord, is there any scriptural support for their endorsement (albeit partial endorsement) of the show.   And the final statement really offers an incorrect understand about Jesus’ mission.  The reference to Jesus’ “endearing qualities…of his non-judgment and willingness to meet people where they are…”

Was Jesus non-judgmental?  During His earthly ministry Jesus revealed sin in people and commanded them to “go and sin no more.”   That’s a judgement of sin. To say that God (Jesus) is non-judgmental is not correct.  God does judge sin.

WHAT THINK YE OF THIS VIDEO? 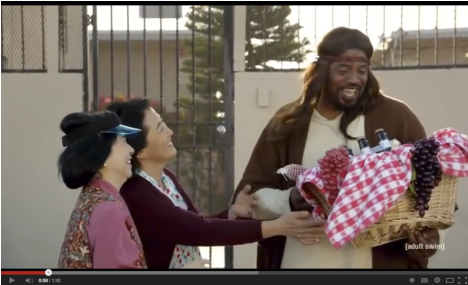 Normally we embed videos on our website, but because of the nature of this video, we have chosen not to do so.  Instead we are sending you to youtube.

The trailer for this TV show has been removed from YouTube.