What God were they calling on to bless the Republican convention? 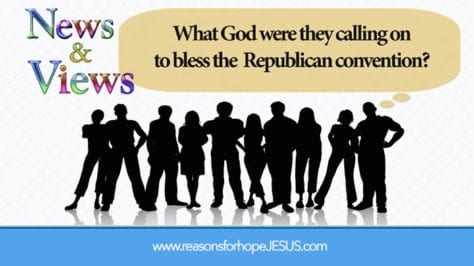 It seems there are a great deal of folks in this country that are staking their future on the upcoming election. For many Christians the Republican party is the one of choice to best take our nation forward.  This is largely due to the party’s platform being very different from that of the Democrats. It is thought to be a much more conservative platform, one Christians can embrace and vote for. Many believe the future of America is on the line with this 2016 election.

The amount of news coverage this current Republican convention and the subsequent Democratic convention will garner tends to boggle the mind. I tend to wonder if more time will be spent listening to the convention speakers than reading the Scriptures. What do you think?

The Invocation That Opened the Convention

It just so happened that on Monday, July 18th I caught The Invocation for the Republican convention.

We know that an “invocation” is defined as “the act of invoking (petitioning) . . . a deity, spirit, etc., for aid, protection.” An invocation is a prayer given to request the blessing of a deity on what is desired to be accomplished. In this case it was a request to bless the Republican convention and the events of the day. (There were additional prayers offered each day.)

On Monday, as the speaker announced the person chosen to give The Invocation, I became troubled in my spirit. Something is not right here, I thought.  A Jewish Rabbi was asked to seek God’s blessing at the beginning of this convention. And as I listened, I waited for the mention of a particular name–a name I did not hear, the name of Jesus.

I could not help but think, “What God are you calling on to bless this convention?” Is it the God of Abraham, Issac, and Jacob only? There was no mention of the God and Father of our Lord Jesus Christ. Yet, there is but one “way” to the Creator God, the one and only God, and that is “through His Son.”  Jesus Himself spoke the words that shatter all other views of intercession with God. Words that shatter the secularist and liberal religious thinkers who so hate it when these words of Christ are brought to bear on human reasoning.

What kind of blessing are the conventioneers expecting? Was it intended to exclude Jesus the Christ, who made it very clear that there is absolutely no “way” to God but “through” Him.

Jesus, of whom God said,

Oh how empty is an Invocation, a prayer to God for blessing, if that prayer says nothing of the God/Man, Jesus Christ. Can we think God somehow finds favor and will bless when His Son is ignored in the request for blessing? Biblically speaking, any such Invocation is of no profit.

The Father said of Jesus,

Men and women who seek God’s blessings on your political endeavors, do you not know that you cannot reach God the Father if your Invocation omits the One in whom He is “well pleased,” the One whom He commands us to “Hear?”

Oh my, what a way to start a convention! Asking God to bless but never mentioning His “Son!” Whether Republican or Democrat, what folly! Oh the intentions may be oh so sincere, intended to be “all-inclusive,” but that intent is bankrupt!

Sadly this opening day prayer was followed by more prayers that omitted the name of Jesus. With each passing day it became more and more apparent the universal intent of these prayers. I’ve been told on many occasions that, “We’re electing a President not a Pastor.” My response is, I know that. But if an Invocation seeks the blessing of God and yet bypasses the only “way” to Him, then the petition is futile . . . . it is folly!