“In God We Trust” will Remain on US Currency 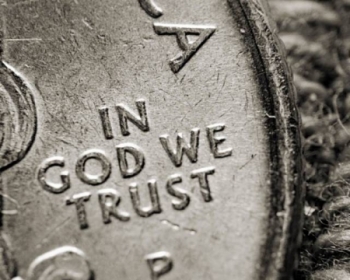 A law suit to remove “In God We Trust” from US currency has been dismissed by a US District Court judge.

Michael Newdow, a well-known atheist,  filed suit in March of this year claiming that the motto “In God We Trust” is a form of proselytizing that violates the Establishment Clause of the United States Constitution.

The suit was brought by the Freedom From Religion Foundation and on Monday, U.S. District Court Judge Harold Baer, Jr. (a  Clinton nominee) ruled against the arguments of the plaintiffs and Newdow, and made these comments:

“The Supreme Court has repeatedly assumed the motto’s secular purpose and effect, and all circuit courts that have considered this issue-namely the Ninth, Fifth, Tenth, and D.C. Circuit- have found no constitutional violation in the motto’s inclusion on currency.

“[The plaintiffs] may be inconvenienced or offended by the appearance of the motto on currency, these burdens are a far cry from the coercion, penalty, or denial of benefits required under the ‘substantial burden’ standard [in case law].”

“In God We Trust” has appeared on U.S. coins since 1864 and and on paper currency since 1957.  It is thought that the motto originated with the Star Spangled Banner, which was written during the War of 1812.  It is found in the fourth verse of the song:  “And this be our motto: “In God is our trust.’”  (for those only familiar with the first verse, entire song lyrics can be read below)

In 1956, Congress passed a resolution making “In God We Trust” the national motto.  The resolution was upheld by the U.S. House of Representatives in 2011 by a 396-9 vote.

We should be thankful that “In God We Trust” will remain on our currency.

Last week we shared about another lawsuit — one brought in Massachusetts to remove “Under God” from the Pledge of Allegiance.  Be in prayer that US lawmakers will rule against that suit and our children will grow up reciting, “One Nation, Under God.”

Oh, say can you see by the dawn’s early light

What so proudly we hailed at the twilight’s last gleaming?

Whose broad stripes and bright stars thru the perilous fight,

O’er the ramparts we watched were so gallantly streaming?

And the rocket’s red glare, the bombs bursting in air,

Gave proof through the night that our flag was still there.

Oh, say does that star-spangled banner yet wave

O’er the land of the free and the home of the brave?

On the shore, dimly seen through the mists of the deep,

Where the foe’s haughty host in dread silence reposes,

What is that which the breeze, o’er the towering steep,

As it fitfully blows, half conceals, half discloses?

Now it catches the gleam of the morning’s first beam,

In full glory reflected now shines in the stream:

‘Tis the star-spangled banner! Oh long may it wave

And where is that band who so vauntingly swore

That the havoc of war and the battle’s confusion,

A home and a country should leave us no more!

Their blood has washed out their foul footsteps’ pollution.

No refuge could save the hireling and slave

From the terror of flight, or the gloom of the grave:

And the star-spangled banner in triumph doth wave

Oh! thus be it ever, when freemen shall stand

Between their loved home and the war’s desolation!

Blest with victory and peace, may the heav’n rescued land

Praise the Power that hath made and preserved us a nation.

Then conquer we must, when our cause it is just,

And this be our motto: “In God is our trust.”

And the star-spangled banner in triumph shall wave