How Should I Witness to Mormons? 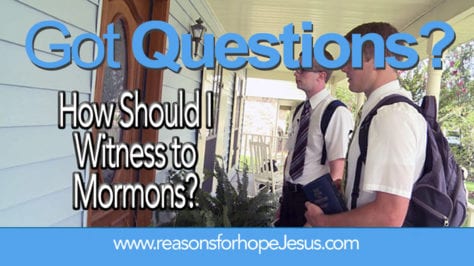 We witness to Mormons the same way we witness to anyone.  We tell them what the Bible says about Jesus.

In order to better present biblical truths to Mormons, it’s important to understand what Mormons believe. By knowing what Mormons believe, when they try to add something from their books or their church’s teachings, you will recognize it and you can respond with biblical truths.  Let’s review some historical background on Mormonism, including the doctrinal beliefs they hold, and the biblical doctrines they reject.

The Book of Mormon was first published in 1830 by Joseph Smith.  It is claimed to contain the writings of prophets of God who tell of God’s dealing with those who inhabited the American continent from approximately 2200 BC to 421AD. While Mormons accept the King James Bible as God’s Word, they also claim the Book of Mormon as the word of God.

Doctrines and Covenants (aka D&C) was first published in 1835.  It contained two parts: lectures that defined church doctrine and important revelations, or covenants of the church.  The doctrine portion of the book was later removed by both the LDS and RLDS churches. What remains is the revelations, most of which were given orally by Joseph Smith, and supplemental material that was added, including letters, reports, statements, and other similar documents.

The Pearl of Great Price is a book of revelations, translations, and writings of Joseph Smith. It was published in 1851 to address faith and doctrines of the LDS church.

The Mormon church does not hold to these doctrines of the Christian faith:

1. Celestial Glory has two levels.  The highest is for faithful and devout married Mormons, who are defined as having kept all the commandments and the Celestial Laws.  Only these people can become gods. The lower level is for single Mormons who lived a good life according to Mormon teachings, and for all good people (other religions) who didn’t hear about Mormonism and, therefore, were unable to become a Mormon. Although dwelling in Celestial Glory, these people cannot become gods.

2. Terrestrial Glory is for unworthy Mormons who failed to keep the commandments and laws of Mormonism, and for good people who knew about Mormonism on earth but rejected it until after their death. (Mormons can pray for the salvation of deceased loved ones).

3. Telestial Glory is for those who rejected Mormonism even after death. These are the wicked people who will suffer for their sins. It’s similar to the Christian doctrine of Hell, only it is not eternal.

Mormons claim they are Christians because they accept the King James Bible and follow Jesus.  And perhaps some of them have repented of their sins, turned to Jesus in faith, and trusted Him alone to pay for their sins and forgive them.  However, many of the beliefs and practices of the Mormon church are in direct contradiction to doctrines found in the Christian Bible.

By accepting the Book of Mormon’s contradictory teachings, Mormons are rejecting the teachings of Jesus, the Word of God. Mormons claim to follow Jesus but not as He is revealed in the Bible. Rather, they teach that Jesus is the spirit child of God and the spirit brother of the devil (not the second Person of the Trinity, making Him God).

While Mormons do believe that Jesus died on the cross and rose again, their belief is that He atoned for our sins in the garden of Gethsemane (not on a hill called Calvary when the wrath of God was poured out in judgment for the sins of mankind). These and other false teachings make Mormonism a non-Christian cult (that is, a system of religious veneration and devotion directed toward a particular person or object, and in this case outside of Christian orthodoxy).