How is Joseph a Type of Jesus? 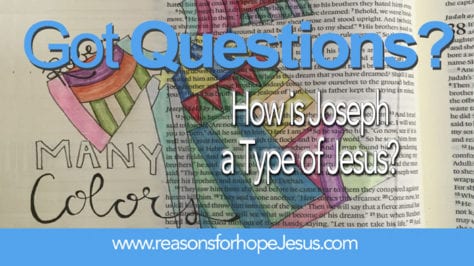 Typology is a form of symbolism that is prophetic.  In Old Testament typology, there are people and objects that pre-figure, foreshadow, “whisper” of, or “point” to something that is yet to happen or someone (most often Jesus) who is yet to come. Joseph is clearly seen as a type of Jesus throughout his life.

From comparative miracles at birth:

— to similar promises made at the times of their deaths:

— the parallels in the lives of Joseph and Jesus illustrate how Joseph served as a type of Jesus to prefigure, foreshadow, point to, and whisper of, the One who would come to save the world.

Gleanings in Genesis by AW Pink

In his expositional teaching on the Book of Genesis, AW Pink (1886-1952) wrote about the patriarch Joseph as a type of Christ.  Providing 60 specifics, Pink’s teaching helps us to “see” Jesus, prior to His incarnation, by revealing His Person and works through types.  Types serve as a prophetic message because they always point to someone, something, some place, or some event that is yet to be.  Read AW Pink’s list of parallels between the patriarch Joseph and our Lord and Saviour Jesus Christ:

21. Joseph’s blood sprinkled coat (goat blood) is presented to his father (Gen 37:31); Jesus is our scapegoat and His blood was presented to the Father as a sin offering. (Leviticus 16:8-10)

26. Joseph was a goodly person (Gen 39:6); Jesus came as a servant into the world and yet lived a goodly (perfect) life.

Compare 41:25 with God revealing what He would shortly do through Jesus Christ in Revelation 1:1.

41. Joseph warned of a coming danger, and urged his hearers to make suitable provision to meet it (Gen 41:33-36); as did Jesus Christ warned His hearers that death did not end all but there was a life beyond the grave that one should prepare and be ready for now.

42. Joseph is portrayed as a Wonderful Counselor in giving wisdom to Pharaoh (Gen 41:33-36); as Christ is known as the One “in whom are hid all the treasures of wisdom and knowledge” (Col. 2:3).

49. Joseph received from Pharaoh a new name (Gen 41:45); as God gave Jesus Christ a new name (Philippians 2:9, 10; Matthew 1:21; Acts 5:31). True is was the name “Jesus” given to Him at His birth. Jesus means Savior, but Jesus could not save His people from their sins until after His death, burial, and resurrection. As Joseph did not become his people’s savior until after his “death,” “burial,” and “resurrection.”

57. Joseph was unknown and unrecognized by his brethren (Gen 42:6, 8); as Jesus today is not recognized by the Jews. Joseph was exalted over all the house of Pharaoh, but Jacob knew it not. All these years he thought (assumed) that Joseph was dead! Today, Jews ‘believe’ Jesus to be dead and do not know that He has been exalted as LORD over all the world.

59. Joseph punished his brethren (Gen 42:7, 17); as God (Jesus) is dealing harshly with the Jews today (Hosea 9:17; Matthew 23:35-36, 38-39. “Joseph was the cause of their troubles now. Joseph was punishing them for their past dealing with himself. The secret of all Judah’s suffering during the past centuries is to be found in the fact that the rejected Messiah has been dealing ‘roughly’ with them.”

60. Joseph made provision for his brethren while they were in a strange land (Gen 42:25); as God (Jesus) promised to provide for the Jews while they are scattered (Jeremiah 30:11; Ezekiel 11:16)