BSA — Bias based on sexual orientation? 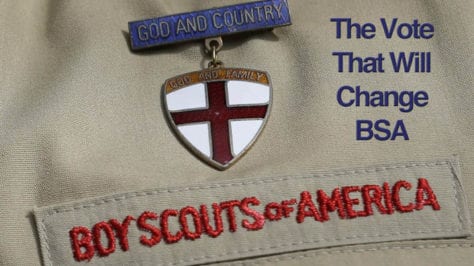 On May 23rd leaders in the Boy Scouts of America (BSA) will vote to decide whether their membership standards should be changed to eliminate any bias based on sexual orientation.  Although the language written in the review of the change is softly presented, the presented change is anything but soft.  The repercussions of the vote will have resounding effects in our country, and in the Kingdom of God.

The BSA’s membership policy is: Youth membership in the Boy Scouts of America is open to all who meet the membership requirements. Cub Scouting, Boy Scouting, and Varsity Scouting are for boys. Venturing is for young men and young women. (Updated March 15)

The adult applicant must possess the moral, educational, and emotional qualities that the Boy Scouts of America deems necessary to afford positive leadership to youth. The applicant must also be the correct age, subscribe to the precepts of the Declaration of Religious Principle, and abide by the Scout Oath or Promise, and the Scout Law.

While the BSA does not proactively inquire about the sexual orientation of employees, volunteers, or members, we do not grant membership to individuals who are open or avowed homosexuals or who engage in behavior that would become a distraction to the mission of the BSA. (1)

Chief Justice Rehnquist delivered the opinion of the Court.

In 2004, the BSA adopted a new policy statement, including the following as a “Youth Leadership” policy: “Boy Scouts of America believes that homosexual conduct is inconsistent with the obligations of the Scout Oath and Scout law to be morally straight and clean in thought, word and deed.” (3)

The above statement closely follows the Mission Statement of the Boy Scouts, which reads, “The mission of the Boy Scouts of America is to prepare young people to make ethical and moral choices over their lifetimes by instilling in them the values of the Scout Oath and Scout Law.” (4)  The Scout Oath reads “On my honor I will do my best to do my duty to God and my country and to obey the Scout Law; to help other people at all times; to keep myself physically strong, mentally awake, and morally straight.” (5)

If the the vote to change the membership rules is approved, then BSA will be in direct conflict to their own Oath.

Jesus explains this in black in white.

John 14:23-24  “Jesus answered and said to him, “If anyone loves Me, he will keep My word; and My Father will love him, and We will come to him and make Our home with him.  He who does not love Me does not keep My words; and the word which you hear is not Mine but the Father’s who sent Me.”

That is fully understandable; there is no room for any other interpretation.  Boy Scouts take an oath to do their best “to do my duty to God…”  Duty to God means loving and honoring Him and that includes keeping His words.  Throughout the Bible it’s clear that God takes a position on sexuality, saying sexual activity is to be between a man and women within the covenant of marriage (Matthew 19:4-6, 1 Corinthians 7:2, Hebrews 13:4).  That means that homosexual activity is unacceptable to God.

So what has changed since the Supreme Court’s 2000 ruling and the BSA’s 2004 statement? I think you can answer that question.

In addition to the obvious conflict with “duty to God” proclaimed in the Boy Scouting Oath, changing this BSA policy will bring many other repercussions.

Significant to note is that many Boy Scout meetings are held in churches.  If membership standards are changed to affirm homosexuality, churches will be forced to decide if they will allow an organization that is in defiance of God’s Word to use the church building for meetings.  If churches do not allow BSA meetings, will they be sued? Also, if BSA changes its standard, what other organization will willingly or forcibly change their standards?  The domino effect of this is far reaching and the repercussions will be numerous.

If we devalue the importance of God and His Word, then we break down morality, integrity and finally Christianity.    Many agree this nation has been blessed by God because of the Christian morals and values by which it was established, and the Christian faith of our founding fathers.  Historically our country has honored God.  The further we move away from honoring our Triune God, the further away from  the blessings of God our nation will be.

Please pray for the leadership of the Boy Scouts of America that they will make a decision based on God’s authority and His Word.  Pray that they affirm what they have stood for since the inception of the Boy Scouts — that God’s Word is to be upheld.

Commit today, to stand up and agree with the faithful and courageous man of God, Joshua, by saying  “…as for me and my house, we will serve the Lord.”

And if it seems evil to you to serve the Lord, choose for yourselves this day whom you will serve, whether the gods which your fathers served that were on the other side of the River, or the gods of the Amorites, in whose land you dwell. But as for me and my house, we will serve the Lord.”