Jacob in the Hall of Faith (Hebrews 11) 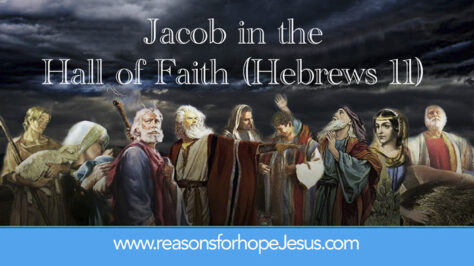 Jacob cunningly deceived his brother Esau into forfeiting his birthright, and then he fooled his elderly father into giving him the coveted blessing of the firstborn. Therefore, many Bible-believing Christians might not even think of Jacob as a hero of the faith.

Yet God is pleased to be known as the God of Abraham, Isaac, and Jacob.  And  God included Jacob in His Hall of Faith:

Hebrews 11:21… By faith Jacob, when he was dying, blessed each of the sons of Joseph, and worshiped, leaning on the top of his staff.

Genesis 32:22-32 tells of a unique encounter Jacob had with an unknown person who seemed to appear out of nowhere and suddenly engaged him in a wrestling match.  At first, Jacob thought he was wrestling with a man, then he believed it must have been an angel.  Finally, he realized he was wrestling with the Lord Himself.  This is called a Theophany, an Old Testament appearance of Jesus Christ.

Genesis 32:24 Then Jacob was left alone and a Man wrestled with him…

Often-times our most significant encounters with God are when we are alone, and we are wrestling with God in prayer.  It’s great to pray with our companions (Matt 18:19), and it’s important to pray with the congregation (Acts 12:12), but it is essential to pray in our closet (Matt 6:5-6) in a secret place alone with God (Matt 14:23).

All Night with God

This intense wrestling match between Jacob and this Stranger continued for hours throughout the whole night until dawn.  This does speak of Jacob’s character as he is now manifesting extraordinary persistence, which is one of the most important ingredients of an effective prayer life.  “ray without ceasing” (1 Thess). Men always ought to pray and not lose heart. (Luke 18:1).

Genesis 32:25  Now when He [the Lord] saw that He did not prevail against him, He touched the socket of his hip, and the socket of Jacob’s hip was out of joint as He wrestled with him.

This had to be agonizingly painful to be in an all-out wrestling match while your hip is out of joint. But Jacob continued to wrestle aggressively for hours.  Again, this is a vivid picture of how we may sometimes be intensely praying to God.  Many Bible characters are described as having intense, even agonizing encounters with God in prayer including; Moses, David, Nehemiah, Daniel, Hezekiah, and, of course, Jesus praying in the Garden of Gethsemane.

This is perhaps one of the most tenacious statements that we read from any biblical person!  Jacob had to be at the point of exhaustion after hours of wrestling.  But it is clear that Jacob realized he was not wrestling with an ordinary man and he boldly stated that he would not let go unless he was blessed.  Jacob’s faith is now revealed in its reality and depth as he was not seeking a physical victory, but a spiritual blessing from heaven.  The Lord was so impressed with Jacob’s bold tenacity that He responded:

Gen 32:28  …”Your name shall no longer be called Jacob, but Israel; for you have struggled with God and with men, and have prevailed.”

Heb. 11:21 By faith Jacob, when he was dying, blessed each of the sons of Joseph…

Genesis 48:8-20, tells the account of Jacob pronouncing a blessing upon the two sons of Joseph, Manasseh and Ephraim.  Manasseh was the firstborn and was in line for that special blessing, but Scripture records how Jacob knowingly crossed his arms as he placed his hand upon the heads of both boys.  Even though Joseph raised a mild protest, Jacob gave the greater blessing to the younger son, Ephraim.  He did this by faith, and in accordance with God’s will.

Heb 11:21  By faith Jacob, when he was dying…worshiped, leaning on the top of his staff.

Jacob was literally worshiping God while he was dying.  What a contrast.  Jacob was born holding on to his brother’s heel, seemingly trying to get the upper hand even as he came into this world (Gen 25:21-26).  But as he is about to leave this world, Jacob is worshipping his God even on his death bed, and he did it “by faith.”  What a way to go!  Jacob went from worshiping God on his earthly death bed, to being transported to where he would be eternally worshipping his God in heaven!

During His earthly ministry, Jesus said… “The hour is coming and now is, when the true worshipers will worship the Father in spirit and truth; for the Father is seeking such to worship Him.” John 4:23.  God has always been desirous and deserving of followers who will put aside their doubts, preferences, and conveniences to make it a personal quest and priority to worship and adore Him.  He is seeking for true worshippers, who will worship Him in spirit and in truth, by faith making it a personal priority.

The question is, what are we seeking?  Are we seeking our own will or God’s?  Are we seeking to please ourselves or our Savior?  Jesus said in Mt. 6:33… “But seek first the kingdom of God and His righteousness, and all these things shall be added to you.”  We can only do that by faith, but it is by faith that we please God.  In fact, “without faith, it is impossible to please Him”…Heb. 11:6.

His banner over us is love, our sword the Word of God;
We tread the road the saints above, with shouts of triumph trod.
By faith they like a whirlwind’s breath, swept on o’er every field;
the faith by which they conquered death, is still our shining shield.
Faith is the victory,  Faith is the victory!
O glorious victory that overcomes the world.